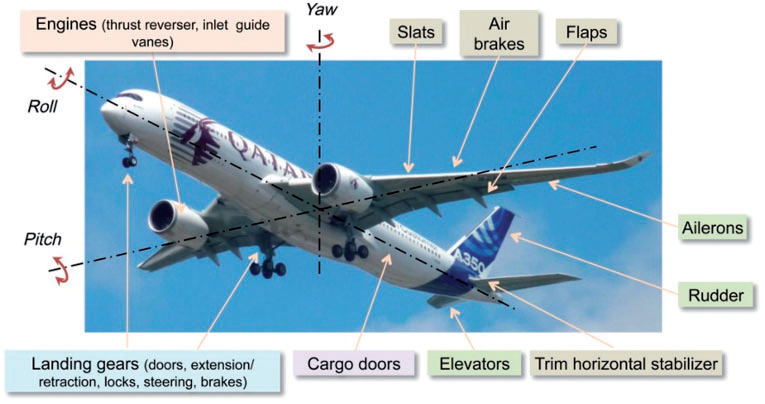 Over the past several decades, the source control signals as well as power for actuators onboard aircraft has evolved. Starting with manual sources like cables and rods, actuation technology gradually advanced to hydraulically- and electrically-driven solutions. The transition away from manual power sources began with hydromechanical systems in which the movement of a control column or lever was transmitted mechanically to operate control valves in the hydraulic circuit, filling and emptying cylinders to produce actuator movement. 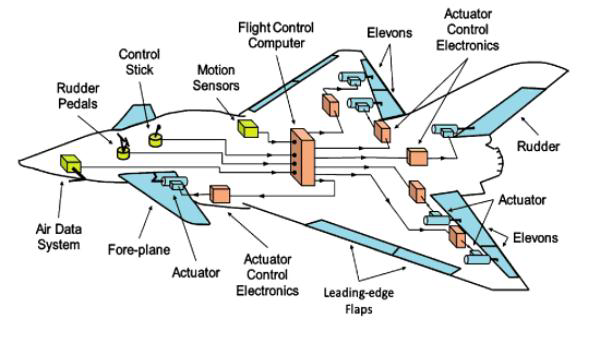 When selecting an actuation technology, a number of considerations are taken into account. Application requirements like force and velocity specifications as well as the size and weight of the actuator are critical. The total cost of ownership factors like energy efficiency, reliability and safety are also important when evaluating total operating costs over the life of the system. Every additional ounce of weight and watt of power required to operate an actuator results in additional fuel burn, making it more expensive to fly the aircraft. 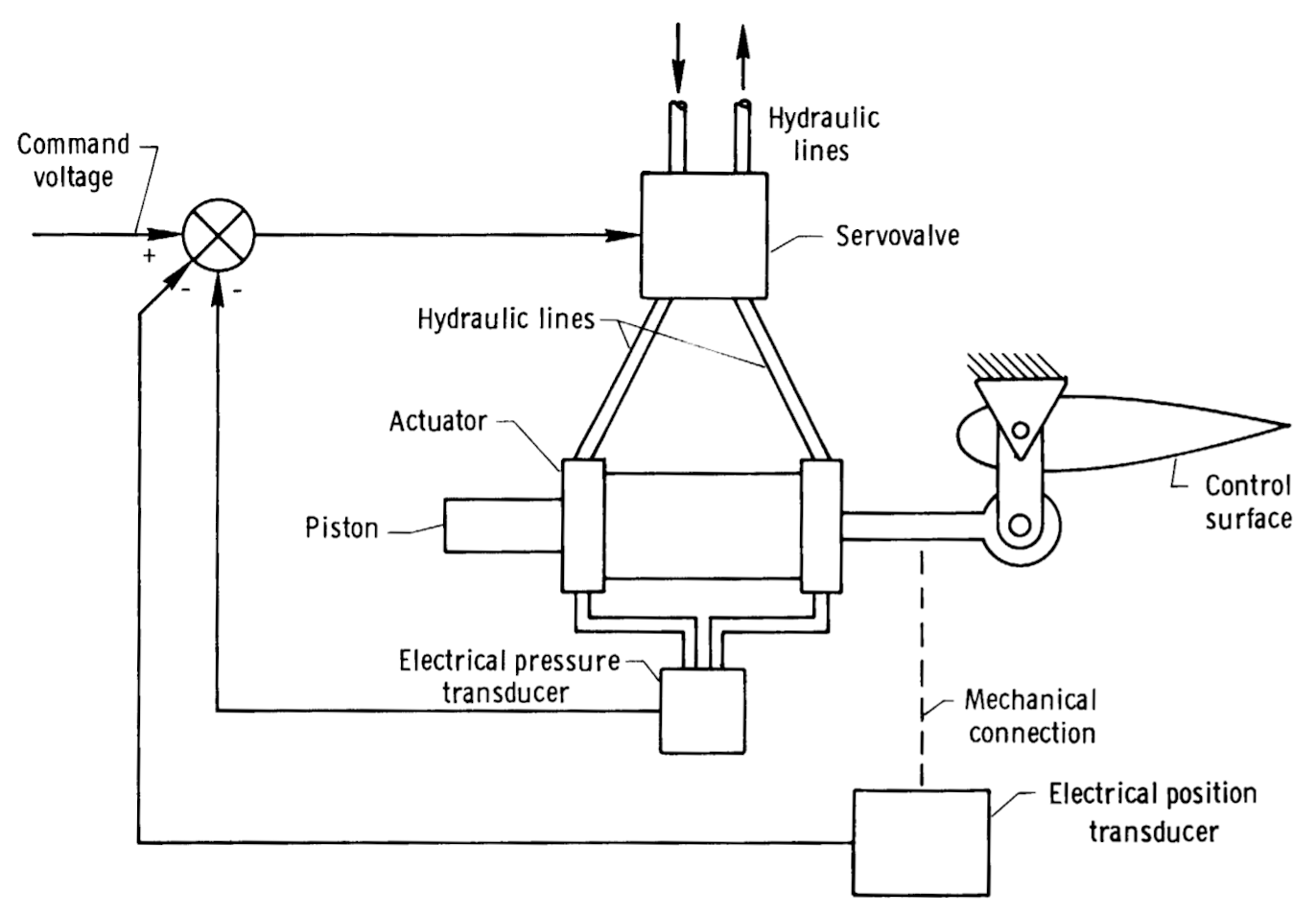 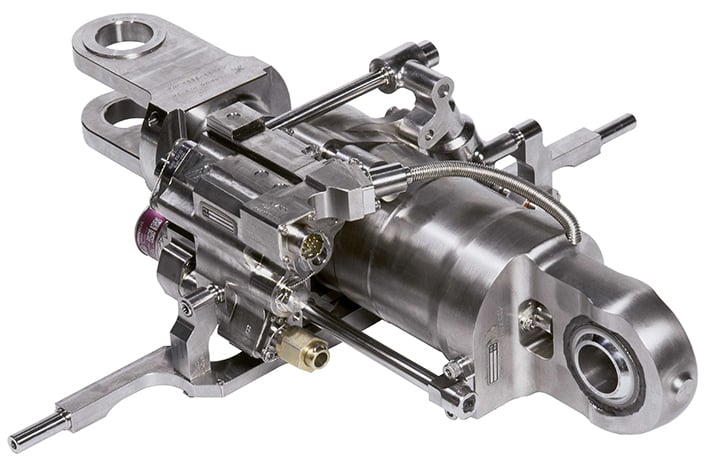 To control the power output of an electrohydrostatic actuator (for example, to move loads of various magnitudes at the same speed), the pump output flow must be controlled. This can be accomplished with either a variable speed electric motor driving a fixed displacement hydraulic pump, or a fixed speed electric motor driving a variable displacement hydraulic pump.

Compared to traditional electrohydraulic actuators, electrohydrostatic actuators operate with higher energy efficiency. Instead of continuously bleeding power from the engines to maintain a large hydraulic network at constant pressure, electrohydrostatic actuators only consume power (in the form of electricity produced by engine-driven generators) when moving the load. Lower energy expenditure produces less heat in the hydraulic fluid, eliminating the need for a cooling system. With fewer points of failure compared to a central hydraulic network with extensive plumbing, the potential for leaks is reduced and maintenance demands are diminished. 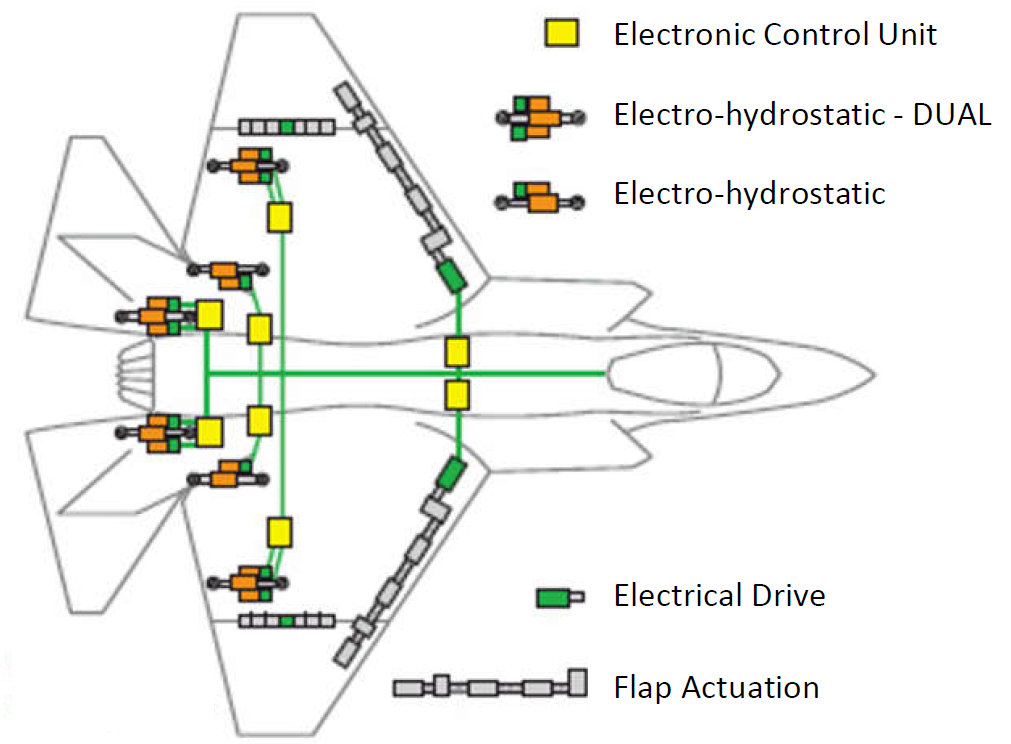 Electrohydrostatic actuators also have advantages over electromechanical actuators. Higher power density allows them to produce higher forces in a more compact package. They also have no backlash issues, enabling precise positioning with no error caused by gaps between mechanical components. In addition, electrohydrostatic actuators do not suffer from the risks of jamming that arise due to interference between gear teeth or screw threads in electromechanical actuators.

A drawback of electrohydrostatic actuators is that they require hydraulic fluid for operation. Although fluid volume is much reduced compared to conventional electrohydraulic actuation systems, the presence of the fluid negates the potential for 100% leak-free operation. 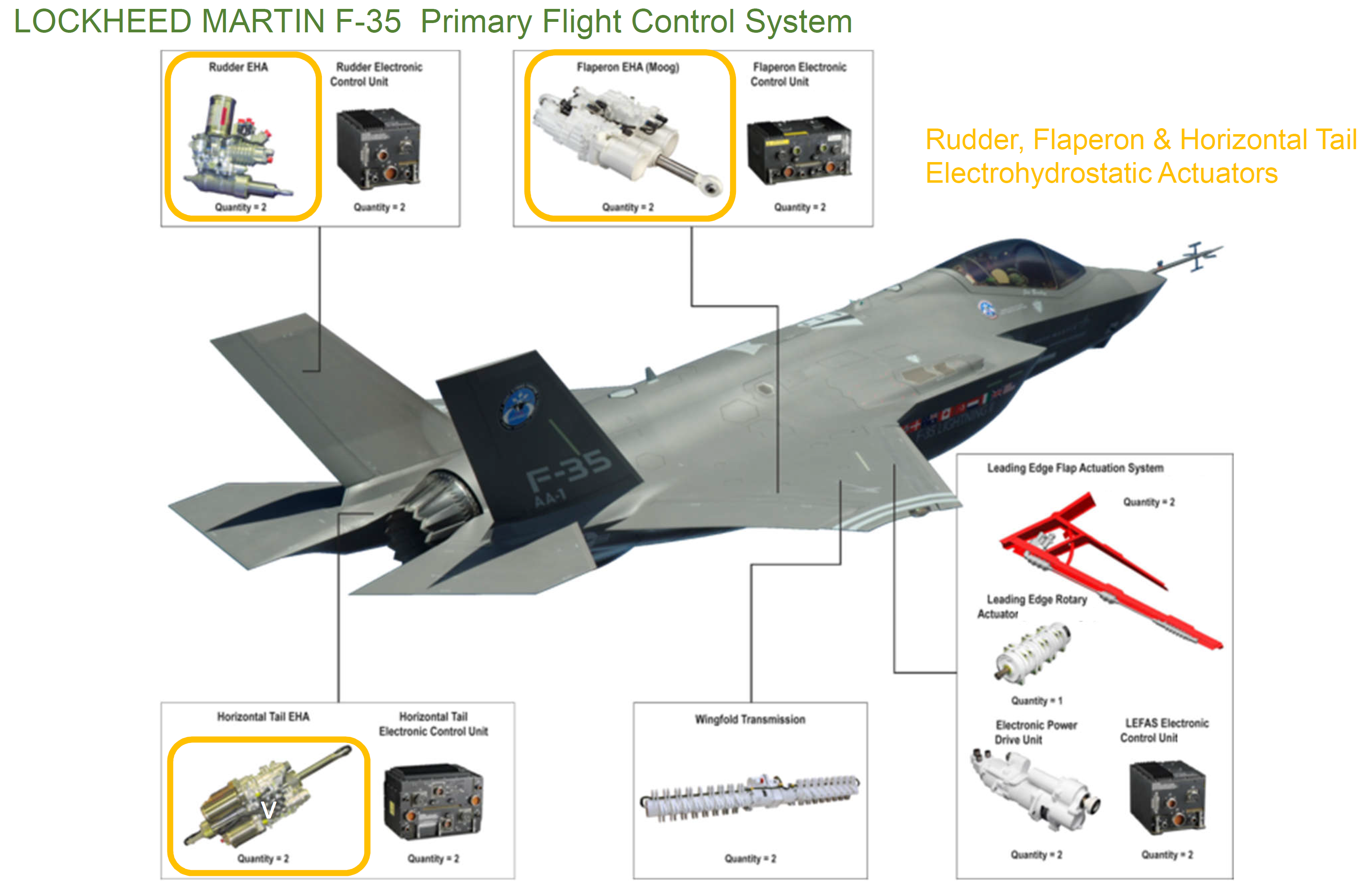 Electromechanical actuators do not use hydraulic fluid, eliminating the presence of the toxic and flammable liquid and its associated piping, power sources and potential for leaks.

Electromechanical actuators convert electrical energy to mechanical energy. An electric motor drives a linear actuator. The rotary motion of the servo motor is coupled mechanically through a gearbox to an acme leadscrew, ball screw or planetary roller screw for conversion to linear motion. Direct-drive versions are also possible in which the motor is directly coupled to the screw mechanism without a gearbox.

A primary benefit of electromechanical actuators compared to conventional electrohydraulic actuators is their elimination of hydraulic fluid. The absence of this liquid and the pipes needed to carry it results in increased safety, reduced weight, saved space, higher energy efficiency and lower environmental impact. Easier maintenance is facilitated by no risk of leaks and a lack of fluid conditioning tasks like filling, charging, purging and filtering.

Electromechanical actuators may appear to be an optimal solution for more-electric and all-electric aircraft, since they completely eliminate the need for hydraulic fluid. Current electromechanical actuator technology, however, runs into limitations for applications requiring high output forces. For example, a large commercial airliner’s main landing gear retraction actuator requires a load capability exceeding 100,000 pounds of force. In such cases, hydraulic actuators have a power density advantage, able to generate huge forces in a small space in harsh conditions without requiring a liquid cooling system for the motor. 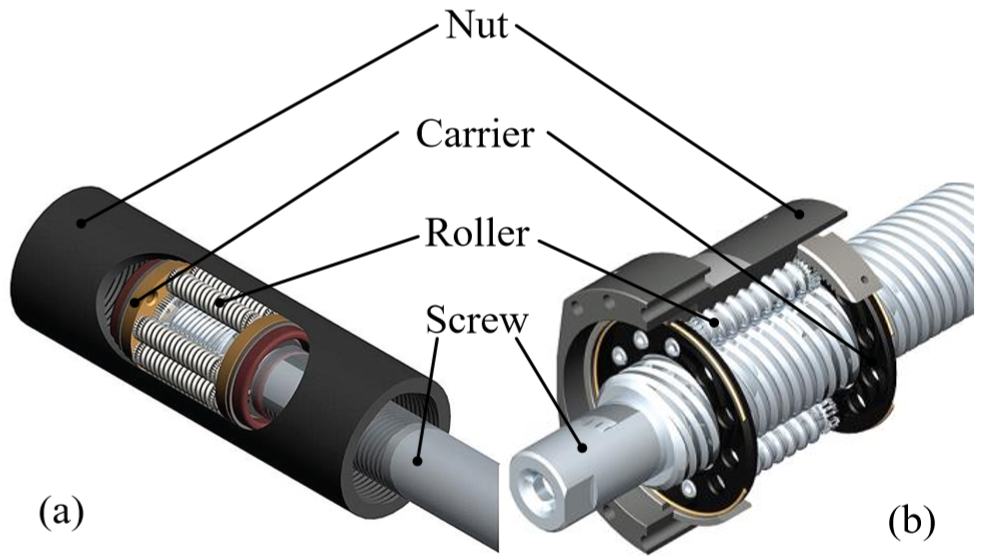 The downsides of electromechanical actuators include backlash, jamming and thermal management issues. Backlash can occur due to gaps between interlocking gear teeth or screw threads and results in positional inaccuracies. Backlash can increase as repeated wear cycles cause surface degradation. Jamming is a risk for electromechanical actuators due to potential failures involving screw components interfering or seizing up, preventing motion of the actuator. This can occur as a result of:

As a relatively new actuation technology for aircraft, the body of knowledge and data around the safety and reliability of electromechanical actuators in operation on aircraft is lacking. The reliability concerns associated with electromechanical actuators point to a need for solutions to improve their operational safety. These solutions could include designs incorporating fault tolerance and redundancy as well as systems for health monitoring and predictive maintenance. Health monitoring systems could incorporate sensors to measure position, backlash, load, torque, vibration and temperature with data generated used in models to predict ideal maintenance intervals to prevent failures before they occur.

Electromechanical actuators are not yet considered mature enough as actuation solutions for primary flight controls that continuously perform safety-critical aircraft flight trajectory corrections (e.g. the rudder adjusts yaw, the ailerons control roll and the elevator changes pitch). Electromechanical actuators, however, are entering service in less critical roles onboard aircraft. They are used on the Boeing 787 for trimming the horizontal stabilizer, actuating the mid-board spoilers and activating the landing gear brakes. 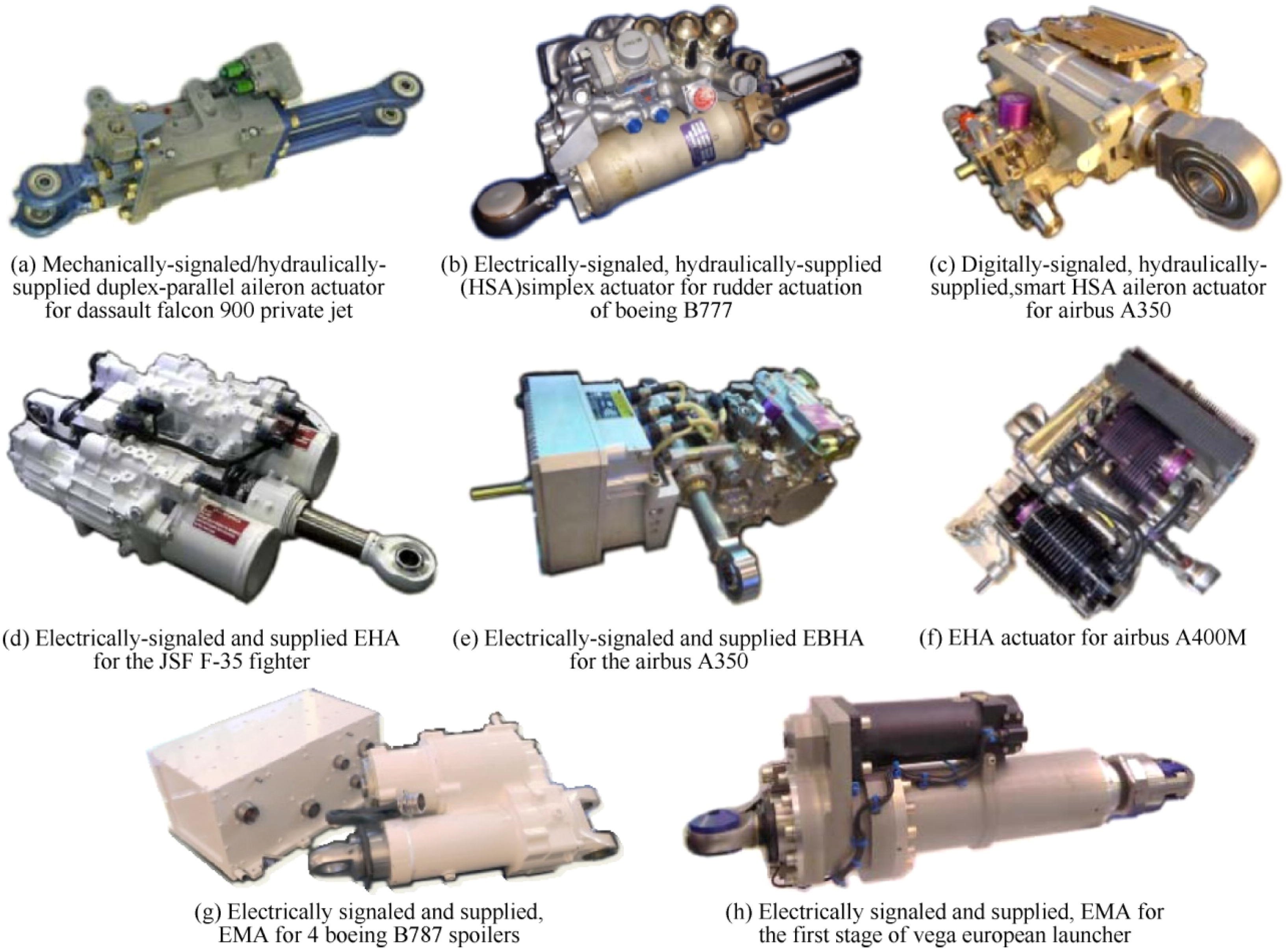 Despite the challenges, electromechanical actuator technology continues to advance as the industry seeks improvements in reliability, thermal efficiency and package sizes. A future may be within sight in which hydraulic actuation is no longer needed onboard aircraft. To bridge the gap, self-contained electrohydrostatic actuators are reducing the need for central hydraulic systems in the transition toward more-electric aircraft with reduced fuel burn and lower maintenance costs.

By posting a comment you confirm that you have read and accept our Posting Rules and Terms of Use.
Re: Aircraft actuation technologies: How do electrohydraulic, electrohydrostatic and electromechanical actuators work?
#1

but there is such an actuator https://www.youtube.com/watch?v=5yskBlksY2c

See the entire discussion on CR4, the Engineering Community
Advertisement
RELATED ARTICLES
How do aircraft brakes work?
Why Electro-mechanical Actuators are Best for Your Aerospace Application
Fluid vs. electric actuators: What's the better technology?
How do thermal actuators work?
Presenting the E2H-ESD electro-hydraulic actuator for emergency shutdown valves
Advertisement