After being used to power a car, a Lithium-ion (Li-ion) battery retains approximately 70% of its initial capacity, making its reuse a valuable energy storage option for electric utilities, according to researchers at the U.S. Energy Department's National Renewable Energy Laboratory (NREL). 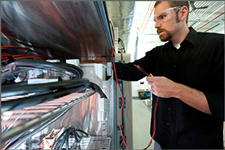 "Our analysis showed that B2U (battery second use) is unlikely to significantly reduce the upfront cost of PEVs, but it will eliminate car owners' end-of-service costs, like battery disposal or recycling, and could even provide a credit of as much as $1,000," NREL Energy Storage Group Manager Ahmad Pesaran says. "The potential of integrating B2U energy storage with the electricity grid could be large with adoption from industry."

Most batteries will become available for second use at the end of the expected PEV service life of around 15 years. NREL studies show that these batteries can potentially continue to operate for another 10 years in second use.

A critical mass of used PEV batteries could become available beginning in 2030, NREL says. That could give automakers and utility operators time to develop strategies to ensure grid reliability, compatibility, cost effectiveness and market acceptance.