The V8 Engine: Can It Survive Automotive Engineering Innovation? 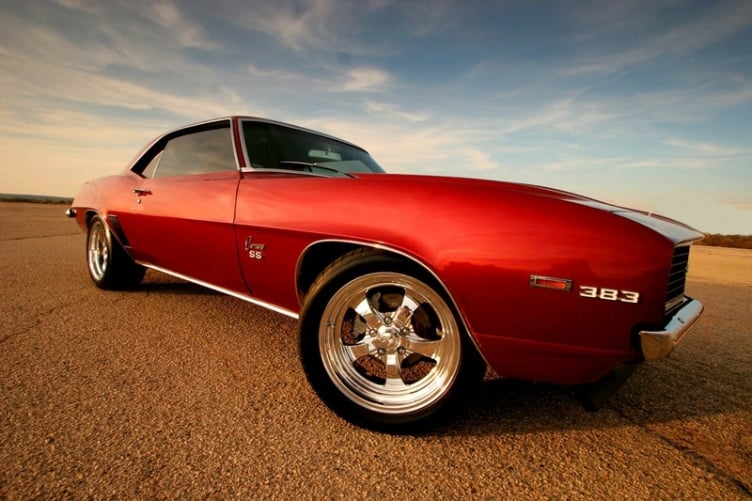 There’s no doubt about it, the V8 has a hallowed place in American history. After World War II most American sedans came with an optional V8. The engines were practical because of heavy curb weights and poor efficiency motors, and they were a necessity if the owner was concerned about social status.

Large, lumbering sedans became iconic of the Baby Boom generation, which was not going to let the cost of fuel dictate their automotive purchases. In 1950, the average gallon of gas cost $0.27, or the 2013 equivalent to $2.08 according to the U.S. Energy Department’s Office of Energy Efficiency and Renewable Energy.

The V8 also has cultural appeal for performance and towing needs. For decades the archetypical power of the Ford Mustang and many other pony cars was possible only with a V8 engine. Yet the stock 2015 Mustang is outfitted with a 2.3-liter, four-cylinder turbocharged engine that supplies 310 HP. In the past, weekend warriors who needed to tow a boat or contractors who needed to haul a trailer sought V8 motors for their torque needs. Today, the F-150 with the most torque is a turbocharged V6, not the naturally aspirated V8.

It’s not just Ford—the entire auto industry is at a crossroads. U.S. Corporate Average Fuel Economy (CAFE) standards will require automakers to have an average fuel efficiency of 54 MPG by 2025. While alternatives such as all-electric or hydrogen cars may be the future, they remain marginalized due to immature technologies. This means gasoline will power the majority of passenger vehicles for the foreseeable future. 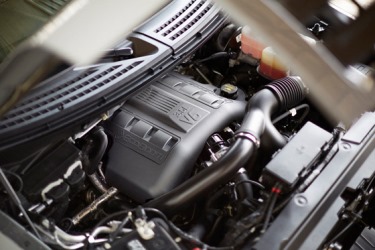 The Ford Ecoboost engine in a 2014 F-150 truck. Image source: Ford MotorTo make 54 MPG in 10 years’ time a reality, automakers are shifting manufacturing toward high-efficiency technologies and designs. This shift begins with implementing low-displacement, turbocharged engines in as many products as possible. Other technologies such as advanced powertrains and rethought automobile bodies also play a role. Meeting fuel mandates also means weaning consumers off gas-thirsty and inefficient V8 engines.

Media reports in the past few years have sounded the death knell for the V8 engine, and it can be easy to interpret recent automaker initiatives as the beginning of the end for the beloved motor. To the contrary, however, OEM investment in low-displacement, high-compression engines for the majority of the market volume may be the only lifeline the V8 engine has left.

Ford’s turbocharged EcoBoost engine family has found its way into SUVs, pickup trucks, police vehicles, and even Jaguars and Land Rovers; all of these applications have seen a phase-out of eight-cylinder engines. General Motors has been putting turbocharged Ecotec engines in American-market cars since 2007 and expects low-displacement, turbocharged engines to account for at least 25% of new vehicle sales by 2017. Satisfying the performance desires of consumers while meeting the efficiency regulations of the government is a balancing act.

Using engine exhaust to drive an air compressor that improves a combustion chamber’s volumetric efficiency, turbo technology has existed for decades. Until recently, automakers had only experimented with turbocharged production vehicles for high- or performance-trim models. Improved fuel efficiency due to turbocharging was a well-known benefit, but the complementary technology was lacking. To maximize efficiency, OEMs had to redesign how fuel is supplied to turbocharged engine cylinders.

In 2011, around 7% of new cars and trucks in the U.S. were outfitted with turbocharger. Today, 21% of new vehicles are so equipped and by 2025 expectations are this figure will increase to 80%. When combined with gasoline direction injection (GDI), turbocharging improves fuel economy between 10-30%. GDI delivers fuel differently than port-injection systems, in which fuel is supplied to the chamber through the intake valve. With GDI, atomized fuel is delivered directly to the cylinder, but the timing and air-fuel ratio are determined by an electronic control unit (EDU) that optimizes combustion based on the engine load.

Ultra-lean burn mode is for light engine loads with no acceleration and constant or slowing speed. Fuel is injected into the chamber during the latter half of the compression stroke with a fuel-air ratio as high as 65:1. Combustion occurs on the cylinder head surface when in position near the spark plug, which keeps combustion away from cylinder walls, a source of waste heat.

The air-heavy ratio also produces a relatively clean exhaust. Stoichiometric mode is moderate loads, such as city driving. Fuel in a 14.7:1 fuel-air ratio is injected on the downstroke and distributed evenly in the chamber. Full power mode is for heavy loads such as rapid acceleration or steep inclines. It has a more enriched ratio than stoichiometric mode although injection also happens during the intake stroke. Both modes produce a cleaner combustion than port fuel injection, as GDI eliminates the intake throttle plate that can create air supply pumping losses.

Adding the fuel injectors to combustion chamber presents a few problems, however. For one thing, they need to withstand an intense working environment. Fuel additives typically are required to keep the injectors clean.

Older generations of automatic transmissions came equipped with a classic torque converter—a fluid coupling that separated loads from the engine and eliminated the clutch pedal and offered a peak efficiency of 80%. Lock-up torque converters are a modern redesign that utilizes a clutch to mechanically connect the pump and turbine when the vehicle isn’t shifting gears. This results in no slippage and almost no power loss. 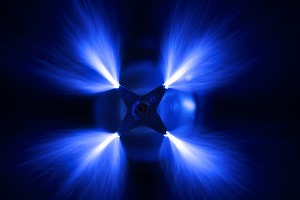 Federal Mogul developed a spark plug known as an advanced corona ignition system (ACIS) that could improve fuel economy by another 10%. ACIS produces an electrical field near the plug tip that turns the air-fuel mixture into an ion-rich plasma. The plasma uniformly ignites when the proper ion density has been reached. This is an improvement over traditional spark plugs, which don’t ignite the fuel-air mixture uniformly. An ACIS plug also reduces the electrical load on the engine as well as emissions.

Laser-ignition spark plugs also are under development. The primary benefit of these is that they eliminate the electrode altogether. Lasers also would create a more uniform explosion by emitting two or three beams into the air-fuel mixture in 800-picosecond pulses. Uniform combustion via lasers also is expected to result in less waste heat and faster engine cycling.

In the 2015 Ford F-150, 700 lb. of curb weight was removed by implementing aluminum alloys in the body and bed. While this move initially was met with some skepticism, the truck has earned positive reviews from industry analysts and aluminum seems set to reshape automotive manufacturing. Lightweight aluminum components were once reserved for performance and European models, but more vehicles are integrating aluminum in higher percentages. The Aluminum Association, an industry trade organization, found that in 2015 11% of vehicle body and closure parts were composed of aluminum. By 2025, more than 26% of these parts are expected to be aluminum.

Carbon fiber composite is another material of interest that was once used for upper echelon applications—fighter planes, airliners, race cars, to name a few. Carbon fiber is strong and lightweight, but the manufacturing process to date was prohibitive for consumer vehicles since the material can be 20 times more expensive than steel and difficult to repair. 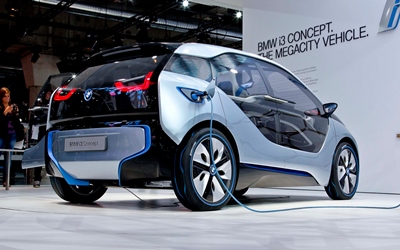 The BMW i3 features a carbon fiber body and a $33,000 price tag. Image source: BMWEven so, BMW is producing the all-electric i3 from carbon fiber and offers it at $33,000. The company took the unusual step of manufacturing carbon fiber in-house instead of finding a supplier. Polyacrilonitrile (PAN) fibers are slowly processed in a 460 F oven that turns the material from white to brown to black. Any non-carbon atoms are burned off the fiber in two subsequent gas-blanketed furnaces, one at 1,300° F and the second at 2,550° F. Resulting fibers are 95% carbon but weigh half as much as before. BMS says that carbon fiber eventually will be the primary material for most of its lineup.

The potential of carbon fiber for automobiles applications has led other manufacturers to play catch up. Ford recently signed a joint development agreement with DowAska to research carbon fiber materials for what the agreement refers to as high-volume manufacturing.

Aerodynamics is an important variable in the fuel economy equation, because reducing a vehicle’s coefficient of drag is one of the easiest ways to improve fuel efficiency. For the 2015 F-150, Ford engineers supplied one of the most aerodynamic pickups ever made by making a few aesthetic changes that have big effects on wind resistance. For example, sharpened corners reduce drag more than rounded ones. A wider tailgate helps reduce air currents from swirling in the truck bed. Ducts behind the front grill direct air toward the wheel wells. A dozen side mirrors were tested for efficiency. Even details such as windshield moldings and door handles were optimized to minimize sources of drag.

CAFE standards state that manufacturers will be subject to penalties if their new-vehicle, fleet-wide average fuel economy is less than 54 MPG by 2025. Essentially, the number of low-efficiency cars an OEM can manufacture is determined by the number of high-efficiency cars it also makes. Vastly outnumbering V8 models with much more efficient four- and six-cylinder engines may be the only way to enrich fleet-wide fuel economy statistics.

“You can still have aficionados that like the horsepower and torque of a V8 and be able to get it at a premium-trim level,” says Mike Wall, director of automotive analysis for IHS Automotive in Southfield, Mich., “yet your mainstream market volume can be that four cylinder turbo.”

But V8 technology also has experienced its share of advancements. Cylinder deactivation is a valuable tool made possible by modern ECUs. The throttle plate restricts the amount of air that goes into the intake valve. At low speeds the piston must work on the downstroke, as not enough air is supplied to the chamber. Some of the power that the engine makes is used to overcome this vacuum, a condition known as pumping loss. Firing every other cylinder or one bank of cylinders results in a better-aspirated engine and better fuel economy.

Start-stop technology is another weapon in automaker’s fuel efficiency arsenal. This technology is especially common in hybrid vehicles, but has begun to appear in gasoline-fueled vehicles. When a vehicle comes to a stop, the ECU cuts fuel to the injector and electricity to the spark plug. These systems require a more durable starter due to increased cycling and a more powerful battery to handle electricity needs when the engine cuts out. Many large cities, such as New York City and Toronto, have enacted anti-idle laws to eradicate needless emissions, so start-stop technology might become more widely mandated. Gasoline engines equipped with start-stop technology can experience on average a 3.5% increase in fuel efficiency, and as much as 10-15% improvement in cities with heavy stop-and-go traffic. One analysis from IHS Automotive estimates that 7% of new cars in 2014 were equipped with start-stop. That percentage is expected to rise to 57% of new cars by 2020.

The truth is V8s are unlikely to return for most light-duty applications. However, V8s will continue to live in performance and towing applications, as long as the majority of the auto market is composed of highly-efficient four- and six-cylinder engines that are exceeding CAFE standards. V8s aren’t anywhere near 54 MPG, but they will continue to a healthy—if marginalized—existence. In some ways it’s possible to see a future where the V8 is one of the last internal combustion engines left. The looming transition from alternative fuels seems inevitable, but these technologies are in a better position to replace combustion engines for the average passenger car, not for pony cars or 2500 series trucks where torque is also a concern.

That’s not to say that V8 engines aren’t becoming outmoded. It simply means that reports of their death may prove to have been greatly exaggerated. 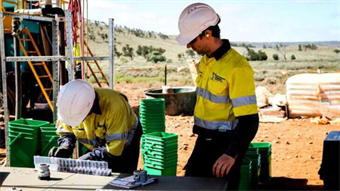