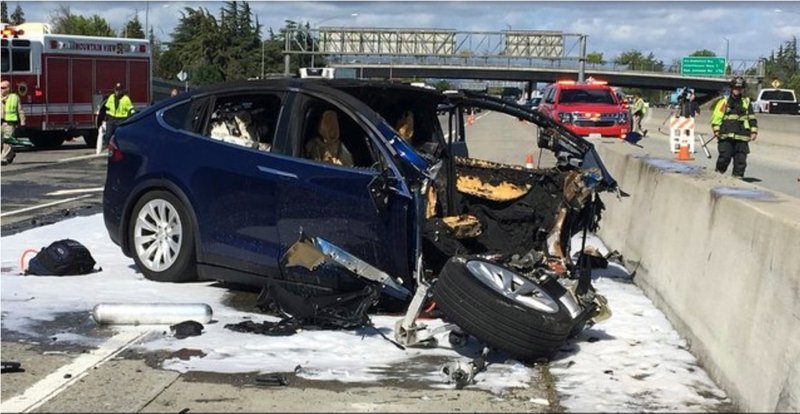 Tesla has confirmed that the Tesla vehicle in a fatal crash that killed the driver, 38-year-old Walter Huang, last week in Mountain View, California, was on autopilot. This news comes just two weeks after a pedestrian was hit and killed by an autonomous Uber car in Arizona as she was walking her bicycle across the street. Video of the Uber crash clearly showed the driver, Rafael Vasquez, was distracted and had his eyes off the road at the time of the crash.

According to Tesla, the driver of the car did not have his hands on the steering wheel for the six seconds immediately before the crash, despite warnings from the vehicle. The automobile's autopilot system requires drivers to keep their hands on the wheel and eyes on the road to supersede the autopilot in cases of emergency.

The Tesla SUV crashed head-on into a concrete lane divider, tearing the hood off the car and smashing the front end of the vehicle. According to the vehicle's data logs, the driver made no attempt to avoid the accident.

This crash is the second fatality involving a Tesla autonomous car. A May 2016 crash killed 40-year old Joshua Brown in Williston, Florida. A report by the National Transportation Safety Board (NTSB) indicated that the autopilot system was partially responsible for the crash.

Re: Tesla Car on Autopilot During Fatal Crash
#1

Re: Tesla Car on Autopilot During Fatal Crash
#2

It's not an Autopilot when riders are told (whispered) "to keep their hands on the wheel and their eyes on the road at all times", (wink, wink, not really, go have some fun and post it on Youtube).

That's just silicon valley double talk for "na na na na na, you can't sue us if you take your hands off the wheel or your eyes off the road."

Outside of the small print everything else about these death traps blares out "Hey, show your buddies how cool you are driving hands-off and watching a movie."

See the entire discussion on CR4, the Engineering Community
Advertisement
RELATED ARTICLES
Update: Tesla Car on Autopilot Accelerated Prior to Fatal Crash
NTSB says driver over-relied on automation in fatal Tesla crash
NTSB: Tesla Autopilot was on at the time of two fatal crashes
Why did a Tesla veer left before a fatal crash?
Tesla crash: NTSB faults an "overreliance on technology"
Advertisement