Dominion says that all major equipment has been operated and is being commissioned as expected following testing and quality assurance activities.

Shell NA LNG is providing the natural gas needed for liquefaction during the commissioning process and is off-taking by ship the LNG that is produced.

Liquefied natural gas is natural gas that has been cooled to a liquid state, at about negative 260° Fahrenheit, for shipping and storage. The U.S. Energy Department says that the volume of natural gas in its liquid state is about 600 times smaller than its volume in its gaseous state. This process, which was developed in the 19th century, makes it possible to transport natural gas to places pipelines do not reach.

A decade ago, the U.S. expected to be a net importer of natural gas. Hydraulic fracturing opened up new sources of gas, including the prolific Marcellus Basin in Pennsylvania, Ohio and West Virginia. Those new sources rapidly reversed the picture and enabled the U.S. to enter the global market as a major LNG exporter, including other producing nations Qatar and Australia. 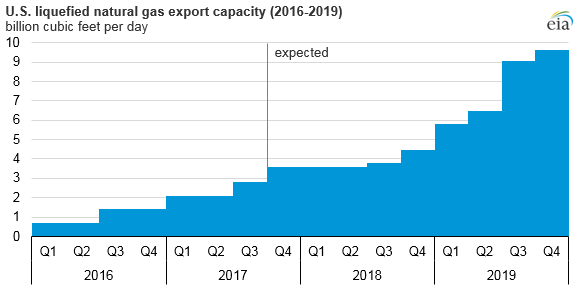 LNG export capacity in the U.S. is growing. Source: Energy Information AdministrationSabine Pass, located on the U.S. Gulf Coast near the Louisiana-Texas border, consists of four existing natural gas liquefaction units, or trains, with a fifth train under construction. When complete, Sabine Pass will have a total liquefaction capacity of 3.5 Bcf/d. EIA says that four additional LNG projects are under construction in the United States, and they are expected to increase total U.S. liquefaction capacity to 9.6 Bcf/d by the end of 2019:

When commissioning at Cove Point is complete, the facility will produce LNG for ST Cove Point, a joint venture of Sumitomo Corp. and Tokyo Gas, and for Gail Global (U.S.) LNG, the U.S. affiliate of GAIL (India) LTD under 20-year contracts.

The liquefaction facility is designed to operate 24 hours a day, seven days a week, and has a nameplate capacity of 5.25 mtpa of LNG, equivalent to approximately 8.3 million gallons of LNG per day. Construction began in October 2014.

By posting a comment you confirm that you have read and accept our Posting Rules and Terms of Use.
Advertisement
RELATED ARTICLES
LNG Exports Ramp Up as Capacity Grows
First LNG Cargo Sails from Texas Facility
US LNG Export Capacity Ranks 3rd in the World
LNG Production Starts at Cove Point
Natural Gas Exports Set to Grow Through 2018, EIA Says
Advertisement