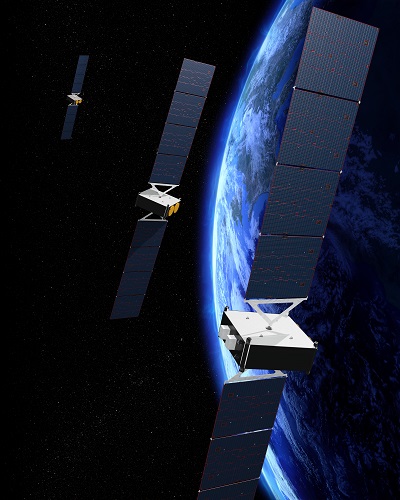 The O3b mPOWER satellites will use electronics from flight-proven 702 satellites. Source: Boeing

The O3b mPOWER satellites will include Boeing’s digital payload technology and will be built using electronics from the flight-proven 702 satellite platform to support MEO environments.

“With this new technology and design, Boeing is able to build satellites faster and more cost-effectively while still providing the high performance our customers have come to expect from Boeing digital satellites,” says Paul Rusnock, chairman and CEO of Boeing Satellite Systems International Inc. “This latest digital payload design has an unprecedented level of technology integration, built-in test capability and is modular and scalable for all orbits.”

Boeing says the O3b mPOWER satellites will offer more power, performance and flexibility than previous next-generation technology. The communication vessels are designed to be launched up to four at a time in a stacked configuration, depending on the selected launch vehicle.

Since, the 1990s, Boeing has built 12 satellites for SES, and the latest was launched earlier this year.

By posting a comment you confirm that you have read and accept our Posting Rules and Terms of Use.
Advertisement
RELATED ARTICLES
All-Electric Satellite with 3-D Printed Parts Will Boost Wi-Fi Connectivity in Flights
Satellite to Bolster FAA Aircraft Navigation Systems
Watch: NASA's GOLD Mission Explores the Edges of Earth's Atmosphere
First Commercial Airlock to be Installed on the International Space Station
RPI and NASA working on robotic arm to refuel space satellites
Advertisement