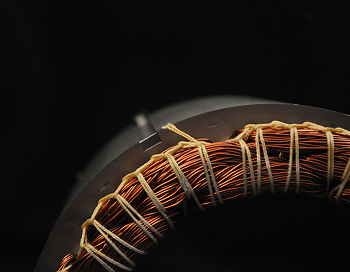 Analysis of the anisotropic thermal conductivity of packed copper used in electric motors is helping to improve the performance and reliability of electric-drive vehicles. Image credit: Kevin Bennion, NRELdistinctive differences between parallel and perpendicular measurements. The thermal conductivity proved to be over two orders of magnitude higher in the direction parallel to the wires than in the perpendicular direction, for a wire packing efficiency of approximately 50 percent.

The researchers then tested 670- and 925-μm-diameter varnish-impregnated copper wire specimens with an insulation coating thickness of 37 μm. The interstices were filled with a conventional varnish material and also contained some remnant porosity. The apparent thermal conductivity perpendicular to the wire axis was about 0.5–1 W/mK, whereas it was more than 200 W/mK in the parallel direction.

By posting a comment you confirm that you have read and accept our Posting Rules and Terms of Use.
Advertisement
RELATED ARTICLES
Watch: A new ShAPE for efficient copper wire
How to Build an Electromagnet
Heat-resistant wire formed with new Al alloy
New strong, conductive, copper-alloy fasteners
CABLE competition to advance conductive material R&D
Advertisement