The carburetor engine has served students in the Society of Automotive Engineers Club at Penn State Erie, The 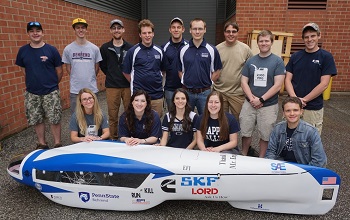 The team's vehicle traveled 2,418 miles on one gallon of gas. Image credit: Penn State BehrendBehrend College, well. The engine helped them secure two first-place finishes since 2012 in the International Supermileage Challenge, a competition that challenges teams to design vehicles that get the most mileage out of a single tank of high-octane gasoline.

The student designers recently swapped out the carburetor engine for a fuel-injection engine and finished second in this year’s 38th annual competition. The revamped vehicle traveled 2,418 miles on one gallon of gas.

The engine is well-suited for the “burn and coast” method of driving that the team uses. At the start of the competition, the driver starts the engine, accelerates for a bit and then turns the engine off to coast the remainder of the course. It’s an intentional attempt at fuel conservation.

The vehicle measures around eight-feet long and less than two-feet high. Its lightweight, aerodynamic design contributes to the fuel efficiency it delivers.

In the future, the team’s goal is to travel 3,000 miles on a single gallon of gas. This year’s first-place team, Université Laval, which also uses a fuel-injection engine, finished with 4,113 miles.

Re: Supermileage Car Coasts to the Finish Line
#1

While the accelerate and coast method may be interesting, I'm more interested in how Universite' Laval was able to go more than 70% farther.

Re: Supermileage Car Coasts to the Finish Line
#4
In reply to #1
WMC

Re: Supermileage Car Coasts to the Finish Line
#2

Is there a minimum transported weight, and a minimum allowable cross-sectional area to these super-mileage competition vehicles? What kind of payload do they carry? Any payload?

Autonomous, with no passenger?

I want a luxury Sedan that gets 166 mpg, but no one in Detroit is making that for some odd reason, even though it is really very simple in principle to do using existing low mass hydraulic motors, hydraulic accumulators, and a specially designed opposing piston (fuel-injected at computer controlled self-ignition point during compression) motor/hydraulic pump, where the motor and pump are integrated as one assembly. I want one of those.

Re: Supermileage Car Coasts to the Finish Line
#3

Accurate News!! So, the 'Americans' who won this event are Canadians <https://www.ulaval.ca> and according to E360 editors, the US 'Americans' who came in a distant second-place are way more noteworthy. Make sense, right?

Re: Supermileage Car Coasts to the Finish Line
#5
In reply to #3
James Stewart

Re: Supermileage Car Coasts to the Finish Line
#6

"I didn't lose. I got second. That's still winning. How could I be unhappy with second place? There are a million people who would love to be in my position." -Lauren Alaina