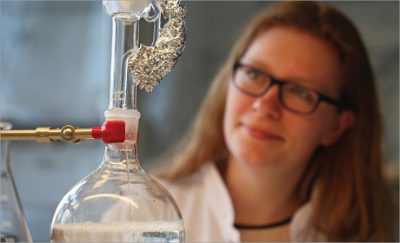 The so-called Soxhlet extraction was used to remove the original sizing of commercial fibers before applying a new coating. Image credit: DTU Nanotech

Researchers from DTU Nanotech have shown that by coating glass fibers, the composite properties can be improved. In the future, this might lead to the development of lighter/longer blades resulting in more energy efficient wind turbines.

During the course of manufacturing, surface treatment (sizing) is applied to the glass fibers to protect the fibers and to ensure compatibility between the fibers and the composites in which they are included. During the past three years, PhD student Helga Nørgaard Petersen has examined the effect of the sizing on the properties of both glass fibers and composites. Petersen explains: “In fiber reinforced composites, glass fibers induce strength to a polymer matrix. The adhesion between the fiber and the matrix needs to be strong in order to transfer the stress applied to the material and the adhesion is closely linked to the interface between the coated fiber and the matrix. Despite the importance, the nature and behavior of the fiber/matrix interface is poorly understood and documented in the literature. With my project, we have come closer to a deeper understanding of the correlation between the sizing and the adhesion and thereby the properties of the fiber/matrix interface.”

Two different methods were used for quantifying the adhesion between the fiber and the matrix: The microbond test and the double cantilever beam (DCB) test.

The microbond test is used in various forms for the determination of the so-called interfacial shear stress (IFSS), which is a measure of the energy needed to separate the matrix and fiber. The test is performed by pulling a single glass fiber out of a micro droplet of epoxy resin. The test was performed at the University of Strathclyde in Glasgow, where Petersen was on a six-month research stay. At Strathclyde, she investigated how the IFSS was affected by changing the ratio between amine and epoxide groups of the epoxy resin.

The results confirmed that a change in the amine:epoxide group ratio would affect the IFSS greatly and that the maximum IFSS appeared at around the stoichiometric ratio of 1:1. From the study it was concluded that the adhesion between the fibers and the matrix could be controlled by varying the ratio of amine and/or epoxide groups in the glass fiber sizing.

In collaboration with the Composites and Material Mechanics section at DTU Wind Energy, mechanical tests were carried out, including the DCB test where the so-called J-integral was determined. DCB tests were conducted on composite laminates specimens. “The J-integral is a measure of how much energy is needed for a crack to propagate along a composite beam causing fibers to bridge across the fracture,” says Petersen. "A stronger adhesion will yield a higher J-integral, as more energy is needed for the debonding of the bridging fibers, and for the crack to propagate through the matrix.” The DCB test was found to be sensitive enough to detect changes in the adhesion as a result of changing the chemistry of the glass fiber surface.

By posting a comment you confirm that you have read and accept our Posting Rules and Terms of Use.
Advertisement
RELATED ARTICLES
Automotive composites, part 3: Quality, inspection and standards
Automotive Composites, Part 2: Material Properties & Performance
How Composite Materials Challenge the Automotive Manufacturing Industry - Part 1 Cost Barriers
ORNL Team Bonds CFC and Aluminum with Lasers
An Inside Look at Carbon Fiber (and How It Can Change the Planet)
Advertisement