Researchers at the Institute for Basic Science (IBS), in South Korea, have developed three key optical components of a circuit that could help pave the way for computing at the "speed of light."

With the end of Moore's Law apparently approaching—a point past which the dimensions of transistors cannot be physically shrunk any further—the future of big data processing will require new technologies to allow high-performance computers with faster operations. The researchers believe that building computers that can process information through light, rather than electrons, will enable this functionality. 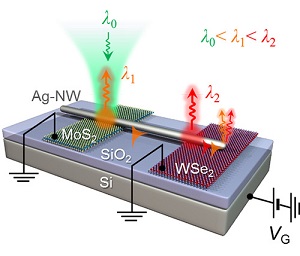 The multiplexer device, with one input and two outputs. Image credit: IBS. However, at nanometer dimensions, light's wavelength is larger than the diameter of silicon fiber, potentially resulting in the loss of some light. According to the IBS scientists, surface plasmons—electromagnetic waves that propagate along the surface of conductive materials such as silver, gold, aluminum and copper—represent a solution to control the propagation of light in matter. Using surface plasmons, optical information could be transmitted at almost the speed of light and in extremely miniature volumes.

The researchers constructed the optical transistor by interconnecting silver nanowire to a flake of MoS2. Light shone on the device was converted to surface plasmon, then to exciton, back to surface plasmon and eventually emitted as light with a shorter wavelength compared to the initial input. For example, if the input light is green, the output light can be red.

Wavelength multiplexing devices were realized in a similar way. However, instead of using only a flake of MoS2, they employed an array of three different 2D semiconductor materials emitting light at different wavelengths. In this structure, for example, a single input light (violet color) generates three output lights (blue, green and red).

"The originality of this paper arises from the exciton-plasmon interconversion," says Lee, first author of the study. "This is the first time that we can complete the circle going from plasmons to excitons and back to plasmons. Using this concept, we created optical transistors and multiplexers."

By posting a comment you confirm that you have read and accept our Posting Rules and Terms of Use.
Advertisement
RELATED ARTICLES
Graphene Enables Breakthrough for Light Confinement
Graphene-Based Sensor Improves Food Safety
Imaging Quasiparticles Could Lead to Quantum Breakthroughs
University of Tokyo researchers develop light-guided linear nanomotors
Promises of a Plasmomechanical Oscillator
Advertisement