A new radar-based imaging system with the ability to penetrate snow-powder clouds could lead to greater avalanche protection for towns, buildings, roads and railways.

Successfully installed and tested in the Swiss Alps last winter, the Advanced MIMO Radar Development for Geophysical Imaging Applications system produces 3D images that reveal how snow flows deep inside avalanches. This new data is designed to strengthen computer models that are used not only to understand the behavior of avalanches, but also to pinpoint ways of building better defenses against them. 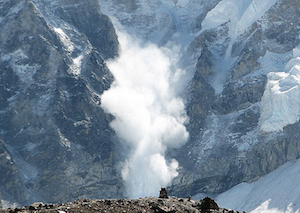 Avalanches kill more than 150 people worldwide each year and cause substantial damage and disruption. Image credit: Pixabay. "It's not possible to predict precisely when avalanches will happen, but our radar imaging system aids understanding of how they behave when they do occur," says project leader Paul Brennan, professor at University College London, which collaborated with Durham University, Sheffield University and the Swiss Federal Institute for Snow and Avalanche Research (SLF) to develop the system. "By penetrating the powder cloud, it can observe the nature and direction of the flow of the 90% of snow that would otherwise remain invisible."

Working on the classic "echo sounder" principle that has underpinned radar ever since its invention in the early 20th century, the system uses an antenna to transmit radio waves and a 1.95-meter receiver array to capture them as they reflect back from the snow. The power and wavelength of the radio waves maximize their ability to penetrate into the snow as it moves.

The system has a 30° field of view providing full coverage of an avalanche track, which its developers say offers greater sensitivity and higher resolution images than other similarly conceived systems. It can work autonomously or be operated manually over a virtual private network.

In addition to killing more than 150 people worldwide each year, avalanches cause substantial damage and disruption. A range of anti-avalanche protection measures are available—from snow fences to nets, dams, tree planting, reinforcement of buildings and laying out towns and villages to minimize damage. These measures can all be expensive, however, with the cost of safeguarding one hectare estimated to be around £750,000.

The insights into avalanche behavior produced by the new imaging system could ultimately help SLF refine such measures so that they can deliver better, more cost-effective protection.

By posting a comment you confirm that you have read and accept our Posting Rules and Terms of Use.
Advertisement
RELATED ARTICLES
Sensor Will Monitor the Inside of an Avalanche
Canada installs extensive avalanche detection system
Watch a 3D Simulation of a Snow Slab Avalanche
Video: Engineering a New Reflector for Radar Measurements
Ski Design Inspired by Turtle Scales
Advertisement