Scientists at the UK’s Bangor and Oxford universities have used spider silk as a superlens to increase the microscope’s potential.

Extending the limit of classical microscopes' resolution has been a goal of researchers for over a century. However, physical laws of light make it impossible to view objects smaller than 200 nm—the smallest size of bacteria—using a normal microscope alone. Superlenses offer the potential to allow viewing beyond current magnification limits.

Just months after revealing their use of a nanobead-derived superlens to break the perceived resolution barrier, researchers led by Dr. Zengbo Wang, at Bangor University’s School of Electronic Engineering, have used a naturally occurring material—dragline silk of the golden web spider—as an additional superlens. In collaboration with Professor Fritz Vollrath’s silk group at Oxford University’s Department of Zoology, the researchers applied dragline silk to the surface of the material to be viewed to provide an additional 2-3 times magnification. 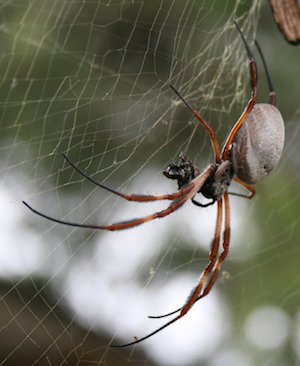 Researchers used the dragline silk of the golden web spider to provide additional magnification to a superlens. Image credit: Toby Hudson, under a Creative Commons Attribution-ShareAlike 3.0 Unported License.According to the researchers, this is the first time that a naturally occurring biological material has been used as a superlens.

“Production of manufactured superlenses involves complex engineering processes [that] are not widely accessible to other researchers," says Wang. "This is why we have been interested in looking for naturally occurring superlenses provided by Mother Nature, [so] that everyone can access superlenses.”

The natural cylindrical structure of silks, at the micron- and submicron-scale, makes them ideal candidates for this role. In this case, the individual filaments had diameters of one-tenth that of a thin human hair. The spider filament enabled the group to view details on a micro-chip and a blue-ray disk that would be invisible using the unmodified optical microscope.

“The cylindrical silk lens has advantages in the larger field of view when compared to a microsphere superlens," says Wang. "Importantly for potential commercial applications, a spider silk nanoscope would be robust and economical, which in turn could provide excellent manufacturing platforms for a wide range of applications.”

The researchers say the lenses could be used for seeing and viewing previously "invisible" structures, including engineered nanostructures and biological microstructures as well as, potentially, native germs and viruses.

By posting a comment you confirm that you have read and accept our Posting Rules and Terms of Use.
Advertisement
RELATED ARTICLES
Space missions could host bacterial factories for fiber fabrication
Unique Spider Silk Is Better than Kevlar
"Dragon Silk" Ready for Spool-up
Team produces adhesive from spider silk
Spinning artificial muscles with spider silk
Advertisement