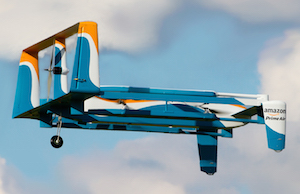 Prime Air vehicles weigh less than 55 pounds and are designed to fly at an altitude of under 400 feet. Image credit: Amazon.The UK government will allow Amazon to trial several technologies designed to facilitate drone delivery of parcels in the future.

A cross-government team supported by the UK Civil Aviation Authority (CAA) has given Amazon permission to explore three services: beyond-line-of-sight operations in rural and suburban areas; testing of sensor performance to make sure drones can identify and avoid obstacles; and flights in which one person operates multiple highly automated drones.

The testing is designed to enable Amazon and the UK government to understand how drones can be used safely and reliably in the logistics industry. It will also help identify what operating rules and safety regulations will be needed to help move the drone industry forward.

Amazon anticipates that its Prime Air service in the future will deliver packages of up to five pounds in 30 minutes or less using small drones. Flying under 400 feet and weighing less than 55 pounds, Prime Air vehicles will take advantage of “sense and avoid” technology, as well as a high degree of automation, to operate beyond the line of sight to distances of 10 miles or more.

By posting a comment you confirm that you have read and accept our Posting Rules and Terms of Use.
Advertisement
RELATED ARTICLES
Amazon Drone Makes First British Delivery
Drone Use for Package Delivery May Gain a Second Look
Video: Project Wing Just Took a Major Step Toward Successful Drone Delivery
Drones More Damaging Than Bird Strikes, According to Study
Japan Could Limit Drone Flights with Proposed Rules
Advertisement