Increasing traffic congestion and escalating air pollution around the world are leading to schemes for cutting the number of individual passenger cars in cities and encouraging the wider use of public transport.

Most bus fleets, which make up the bulk of urban transport connections, are still powered by internal combustion engines. The goal of many cities is to electrify their bus fleets. It will be a gradual move, tied to the introduction of intermediate solutions such as hybrid drives, before it can be fully realized.

A Tale of Many Systems

Urban transport in large cities depends on different complementary systems, each with its advantages and drawbacks. 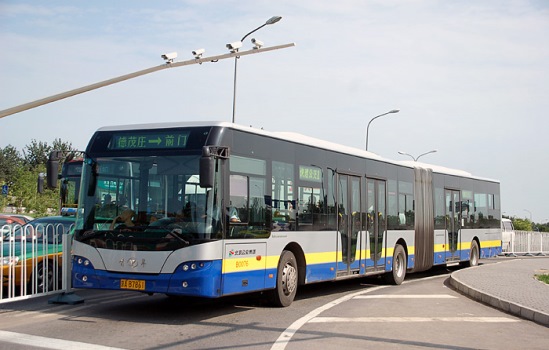 Beijing BRT Line 1. Note the doors on the left-hand side of the bus -- the BRT line uses central island platforms for most of its route. Image source: wikipediaMass transport systems such as metro, trams and suburban railway lines already rely on full electric traction. They present two major advantages: they have a huge transport capacity (for example, 700-1,000 passengers each for Paris Metro trains; 600-900 for London Underground trains; 200-300 for most trams) and they are zero-pollution vehicles at the point of use.

However, the necessary infrastructure is costly to build, and must be designed to ensure it meets actual needs; it is also inflexible to potential route changes.

For their part, buses bring greater flexibility to public urban transport. However, with the exception of trolleybuses (which also require a special infrastructure, with overhead cables), they currently present a significant disadvantage: they are powered predominantly by internal combustion engines (ICE), most of which burn diesel. As a result, they are polluting and noisy. Also, buses are high on maintenance and need to be replaced more frequently than metro or trams, which can run for decades. As a result, their total cost of ownership (TCO) is high.

On the other hand, buses have significant advantages as they:

· Are relatively standard and low-investment products (with the relative exception of trolleybuses, which need overhead cables)

· Can be easily rerouted in case of road works or traffic obstructions.

The electrification of urban bus fleets will be a gradual process introduced over many years. The scale of the changes is massive, as bus fleets can be extremely large in megacities (for example, there are more than 21,000 buses in Beijing, 16,000 in Shanghai, and 8,700 in London).

The green and sustainable electrification of urban fleet buses does not imply solving technical issues alone, but also means getting a number of important stakeholders involved, such as:

· Vehicle manufacturers, who will come up with new solutions

· Operators, who can look forward to lower operating costs and increased profits

· Users and city residents, who can look forward to cleaner urban transport.

The renewal – and gradual greening – of bus fleets will vary greatly, as is currently the case with their use and predictable wear and tear. The average age of a London bus, for instance, is 7.7 years, during which it will cover some 57,000 km a year. Buses in the Paris region have an average age of 7 years and cover roughly 38,700 km a year.

The average age and renewal rate give operators the ability to plan ahead. Public policies play an important role, too, with government or local authorities phasing out discounted diesel fuel prices for traditional city buses and offering varying subsidies for electric buses. Beijing plans to increase the share of e-buses in the capital to 80% by 2019 with this kind of regulation. 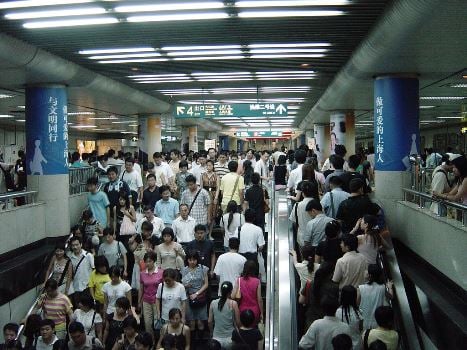 Commuters at a central metro station in Shanghai. Image source: wikipediaFull electrification will likely take different forms, but it likely cannot be achieved immediately as full charging infrastructures are not yet available. Manufacturers and operators will initially adopt some form of hybridization of vehicles using one of the following systems:

· Hybrid drive with an ICE (diesel, liquid or compressed gas, petrol), possibly an ICE range extender. Power comes from a generator driven by an ICE. In addition, energy recovered from braking or from energy harvesting shock absorbers is stored in energy storage devices like batteries, ultracapacitors or flywheels. A start-and-stop function for the ICE allows the bus to run on batteries alone, when necessary. Advantages: low emissions and low TCO.

Fully electric bus fleets will rely on batteries for power (with the exception of trolleybuses, which, however, increasingly use batteries to power emergency traction motors when electricity from overhead cables is not available). However the systems will differ.

IDTechEx, a market research company, estimates that the market for medium and large hybrid and pure electric buses will exceed $132 billion in 2026, with the global market for large-sized batteries used in buses reaching $30 billion, potentially making it the largest segment of the overall battery market.

Manfred Schmidt from Siemens AG electric and hybrid drives outlined a potential scenario for the future of the city bus at a presentation at a recent IDTechEx event. He said that the city bus of the future would be emission free and would:

· Have an energy-efficient electric traction system.

· Have an energy storage battery to enable charging from external energy, and,

· Be either a “project-designed bus” for specific route applications and with limited flexibility using one of the following options: opportunity charging, smart trolley charging, huge battery designed for the worst case scenario, on-road charging, battery swapping or another solution, or,

· Be a “product bus” that is flexible and route-independent like today’s buses with ICE. It will be equipped with a fuel cell range extender.

Virtually all existing solutions adopted for the electrification of urban mass transport systems like metros and trams or medium-sized vehicles depend entirely or in part on IEC International Standards developed by IEC Technical Committees (TCs) and Subcommittees (SCs).

Transport systems include a wide range of components and systems such as cables (Standards prepared by IEC TC 20), power electronic systems and equipment (IEC TC 22), fuses (IEC TC 32) and connectors (IEC SC 48B).

Other IEC TCs and SCs central to the development of urban electric transport are:

Standardization work by these IEC TCs and SCs underpins the widespread adoption of urban electric transport systems, which are set to improve the health and quality of life of hundreds of millions across the world as well as cutting the negative environmental impact of mass transportation systems.

By posting a comment you confirm that you have read and accept our Posting Rules and Terms of Use.
Advertisement
RELATED ARTICLES
Here's how school buses could support the power grid
Opportunity Charging for Electric Buses in the UK
This Just-Funded Project Will Test Electric Bus Grid Support
Beijing EV Filling Station Charges 30 Buses at a Time
600 hybrid electric buses are ordered by this transit authority
Advertisement