Contrary to popular opinion, Henry Ford didn’t invent the automotive assembly line. That was Ransom Olds of Oldsmobile fame, who reportedly patented his novel manufacturing approach in 1901. Twelve years later, Ford simply took Olds’ good idea and made it better. Much better, it seems. Rather than using a stationary line like Oldsmobile, the Ford Motor Company founder added a moving conveyor, thereby reducing worker fatigue while drastically increasing production throughput. The concept stuck, and more than a century later, the moving assembly line remains an integral piece of most automobile manufacturing.

More efficient motion
As with any electromechanical system, however, there’s always room for improvement. Craig Dahl knows this quite well. As manager of the parts and service department at OCC Conveyor Inc., he was a member of the team called upon to design and build a more efficient means of driving the assembly lines at a leading automaker’s plants in the U.S., Canada and Mexico.

The heart of what is now known as the OCC Systems Torque Arm Conveyor Drive is a custom-built gearbox solution that utilizes the overhead conveyor drive gear unit from NORD Drivesystems, who collaborated 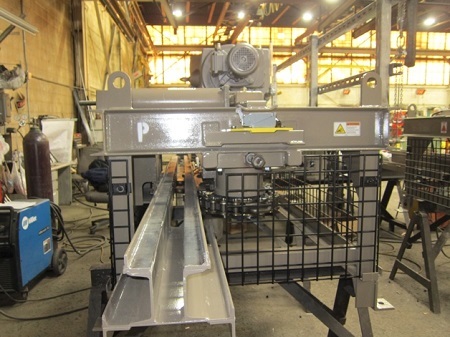 Source: OCC Systems extensively with OCC on its design and implementation.

OCC systems engineering manager, Carl Wingert, working with NORD developed “the extended shaft gearbox specifically for this application.” And because conveyor systems in different automotive plants will require different horsepower ratings and output speeds, NORD provides OCC with a complete range of gearboxes to accommodate. So far, that includes everything from 2 horsepower all the way up to 20 horsepower, and conveyor speeds from 5 to 70 feet per minute (FPM). Working directly with automotive customers and NORD, OCC has implemented high speed indexing inverted conveyors that are run at 125 FPM.

Fighting friction
One key feature of the Torque Arm Conveyor Drive is its ability to use the ANSI X458 and X678 and comparable styles of drop forged rivetless chain, an automotive standard that dates back to Henry Ford’s days. It also eliminates all V-belts thanks to an integrated gear motor and brake, has a backup bar and crank arm that allows two systems — one passive, the other active — to work in tandem, and numerous design enhancements such as centralized lubrication, simplified torque settings and bolt-on adjustable legs for easy leveling.

“By moving away from belts and pulleys, we eliminated numerous connection points, each of which increases friction and leads to power loss,” said Dahl. “The net effect is greater energy efficiency, which we calculate at about 5% or more. That might not sound like a lot, but the annual savings in electrical costs are significant for a large manufacturer with hundreds of multi-kilowatt motors on the production floor.”

Perhaps even more important is the ease of maintenance and reduction in conveyor downtime. Not only are the new systems faster to service and repair, but because of the backup bar and crank arm mentioned earlier, a drive that fails during a production shift can quickly be brought online by switching to the backup system, allowing technicians to service the defective unit after hours.

By posting a comment you confirm that you have read and accept our Posting Rules and Terms of Use.
Advertisement
RELATED ARTICLES
10 Safety Precautions You Must Be Aware of When Performing Conveyor System Maintenance
Materials conveyors: A guide for specifying belt conveyor systems
NORD Gear to showcase gear units for poultry processing industry at IPPE 2020
Video: Clean-in-place option expands DynaClean Conveyor line
Industrial gear units built for the toughest applications
Advertisement