There are a lot of components that go into making a car run smoothly and efficiently. However, one of the most important, but often overlooked, is the timing. Timing belts, chains, gears and pulleys all work together to ensure that the engine is getting the correct amount of air and fuel at the right time. If something is off with the timing, it can lead to decreased performance and significant engine damage. That's why it's so important to make sure that everything is in good working order before taking a car out on the road.

As with most things related to car performance, the history of engine timing can be traced back to racing. In the early days of competitive motorsport, engine builders were constantly searching for ways to eke out a bit more power from their machines. One area that they focused on was the timing of the ignition — specifically, advancing it so that the spark occurred earlier in the cycle. 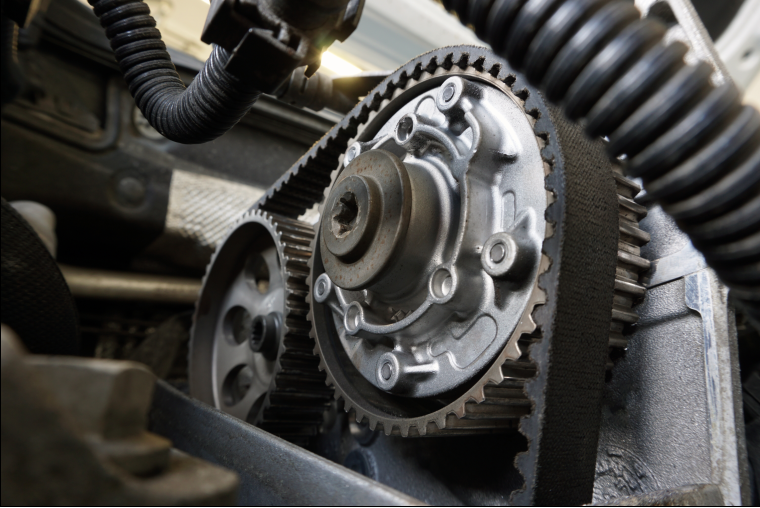 This had the effect of increasing power, but it also made the engine less reliable and more prone to failure. As engine technology progressed, however, engineers were able to develop timing systems that could withstand the rigors of racing while still providing a power boost.

These days, modern engines are fitted with highly sophisticated timing systems that allow for a much wider range of adjustment than was ever possible in the past. This means that engine builders can tune an engine for specific conditions — such as increased power output or improved fuel economy — and be confident that the timing system will be able to cope.

Of course, as is often the case with racing technology, the benefits of modern engine timing are not just confined to the track. Many of the same principles that allow for increased performance in a competition setting can also be used to improve the efficiency of road-going vehicles.

The timing chain is a vital engine component that has undergone significant changes over the years. Most modern timing chains are made of cast iron. They are much more resistant to stretching and breakage than previous iterations. However, it is important to note that it is not the actual chain stretching, it is wear on the gear teeth and link pins that give the illusion of stretching. These modern versions require less maintenance and can last the engine's lifetime.

One of the most important changes to timing chains has been the introduction of hydraulic tensioners. These tensioners keep the chain tight, which reduces wear and tear on the chain and sprockets. It also leads to a quieter running engine as there is no metal-on-metal contact.

Another change has been the use of chain guides. These help to keep the chain from coming off the sprockets, which can cause engine damage.

A gear drive is a type of mechanical power transmission that uses gears to provide speed and torque conversions from one rotating shaft to another. Gear drives are used in a variety of applications, including vehicles, conveyors, pumps and compressors. Gear drives eliminate any flex or stretch that may occur in a chain or belt drive, resulting in increased efficiency and reliability.

They offer greater timing accuracy and prevent speed fluctuations that can cause damage to expensive components or lead to unexpected downtime. Gear drives are more expensive than chains and significantly noisier. However, they are theoretically stronger and will last longer than chains.

Some issues with gear drives are that they can interfere with other components in the engine, particularly if it is a custom build with many accessories. They can also introduce harmonics into the valvetrain, which can cause valvetrain or camshaft failure. Because of this, some manufacturers recommend users to stay away from gear drives for specifically high-revving engines.

Belt drives don't stretch, so they don't require frequent tensioning, and they're very quiet, offering minimal friction. Belts are also relatively inexpensive, making them a cost-effective option for many carmakers.

Belt-drive timing systems are often used in conjunction with other types of timing systems, such as chain or gear drives. In a belt-drive system, the engine's crankshaft pulley is connected to the camshaft pulley via a belt. The belt rotates the camshaft, which opens and closes the valves at the correct time.

Belt-drive systems are typically found in passenger cars and light trucks. However, some heavy-duty trucks and buses also use belt-drive systems. They are also the preferred route to go in many racing applications like NASCAR.

Belt-in-oil systems have also grown in popularity in recent years. In this type of system, the belt is immersed in a specific type of engine oil, which lubricates and cools it.

This helps to extend the life of the belt and reduces noise. As expected, oil changes are even more important when this type of timing system is used. Manufacturers have claimed that the belt-in-oil systems can have up to a 30% performance advantage over their dry counterparts, however there is little literature out there to support these claims.

Timing is critical in all aspects of life, and automotive engines are no exception. The science of perfect timing has come a long way since the first engine was designed. Racing enthusiasts were some of the first to understand and appreciate the value of proper engine timing — and now, so does everyone else with an engine in their car. Whether you're using a belt drive or gear drive system, it's important to time your engine components perfectly for peak performance.

Here we’ve explored the different types of engine timing systems and how each one works. Engineering360 would love to hear from you about your experiences with engine timing — leave us a comment below!

By posting a comment you confirm that you have read and accept our Posting Rules and Terms of Use.
Advertisement
RELATED ARTICLES
Fundamentals of timing pulleys and belts
Timing belt pulley design: What every product designer must know
Timing belts vs. flat and V-belts
What to know about timing belt pulleys
How Your Car's Engine Actually Works
Advertisement