Energy storage system owners could see savings from a flow battery technology that is projected to cost 60% less than today's standard flow batteries.

The organic aqueous flow battery, developed by Pacific Northwest National Laboratory (PNNL) researchers, is expected to cost $180 per kilowatt hour once the technology is fully developed. The lower cost results from the battery's use of inexpensive organic molecules for its active materials rather than commodity metals used in today's flow batteries. 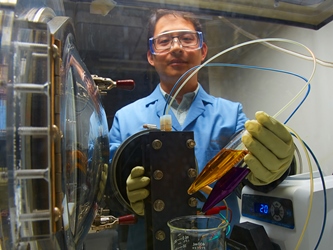 Flow batteries generate power by pumping liquids from external tanks into a central stack. The tanks contain liquid electrolytes that store energy. When energy is needed, pumps move the electrolytes from both tanks into the stack, where electricity is produced by an electrochemical reaction.

"Using readily available materials makes our all-organic aqueous flow battery more sustainable and environmentally friendly," Wang says. "As a result, it can also make the renewable energy it stores and the power grid it supports greener."

Next, the team plans to make a larger version of their test battery that is able to store up to 5 kilowatts of electricity, which could support the peak load of a typical U.S. home. Other ongoing efforts include improving the battery's cycling so it can retain more of its storage capacity longer.