Battery technology is gaining traction in the railroad sector, with viable applications ranging from the replacement of polluting diesel propulsion in freight systems to the provision of emergency power supplies at railroad crossings.

Used electric vehicle (EV) batteries can find a second but more stationary life as alternatives to the lead-acid units commonly deployed to supply emergency power at railroad crossings. Nissan is now demonstrating this application with second-life lithium-ion batteries from Leaf EVs. These units can still retain up to 80% of their storage capacity at the end of a vehicle’s life cycle, can still retain between 60% and 80% storage capacity and can still deliver a service life of 10 years compared to between three years and seven years for lead-acid batteries.

Environmental sustainability underscores the case for converting diesel-driven freight systems to battery-electric propulsion. In the U.S. alone, diesel freight trains emit 35 million metric tons of carbon dioxide annually and produce air pollution that leads to $6.5 billion in health costs. Recognizing the energy and ecological merits of switching from diesel to electric, researchers from U.S. Lawrence Berkeley National Laboratory, University of California Los Angeles and University of California Berkeley maintain that diesel-electric trains can be retrofitted with batteries in a way that is cost-competitive with diesel.

The researchers considered the case of a train operating in California equipped with high energy density and high voltage lithium ferrous phosphate batteries. Four 3.3 MW locomotives pulling 100 boxcars and 6,806 tons of revenue-earning cargo, powered by a single battery boxcar, can achieve a 241 km (150 mile) range, enough to meet the average distance between stops for U.S. Class 1 freight trains. The weight of the battery car increases the train's energy use by about 5% but overall energy consumption is about half of that consumed by a typical diesel-electric train. 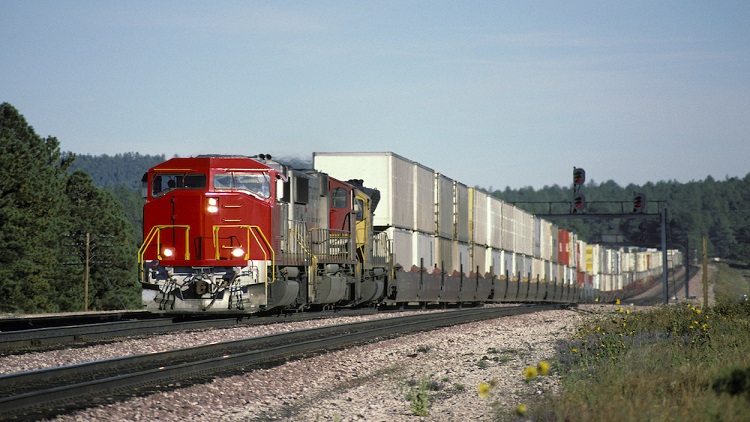 Near elimination of air pollution from diesel-electric freight trains is possible by retrofitting them with battery tender cars. Source: BeyondImages/iStock

Retrofitting existing diesel-electric freight trains with battery tender cars also offers dual-fuel capability, allowing for either battery or diesel usage. These systems are expected to achieve parity with diesel-electric trains if environmental costs are included or if rail operators can achieve 40% use of fast-charging infrastructure.

By posting a comment you confirm that you have read and accept our Posting Rules and Terms of Use.
Advertisement
RELATED ARTICLES
BNSF to Test Battery-Electric Locomotive
Video: Battery initiative to boost UK rail service
Ask the Expert: Oil Analysis for Railroad Fleets
Alstom Inks Deal for Hydrogen Trains
Toward Greener Urban Transport
Advertisement