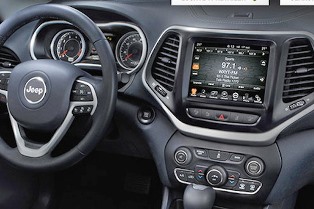 The UConnect radio head unit of a 2015 Jeep Cherokee, the same type that was hacked by two security experts. Credit: Chrysler Automaker Fiat Chrysler has announced a voluntary recall of about 1.4 million cars that were built with certain Internet-equipped radio-entertainment systems.

"The recall aligns with an ongoing software distribution that insulates connected vehicles from remote manipulation, which, if unauthorized, constitutes criminal action," the company says in a press release in late July. "The security of [Fiat Chrysler] customers is a top priority, as is retaining their confidence in the company's products."

Dodge Rams, Dodge Chargers and Jeep Cherokees manufactured between 2013 and 2015 and those come equipped with 8.4-inch infotainment system touchscreens were included in the recall.

"Accordingly, FCA US has established a dedicated System Quality Engineering team focused on identifying and implementing best practices for software development and integration," the statement says.

The company says there was “no defect” found in the cars being recalled, and that a car-hacking scenario involving software manipulation would require "unique and extensive technical knowledge, prolonged physical access to a subject vehicle, and extended periods of time to write code." It adds that "no defect" had been found in the cars being recalled.

Vehicle owners were asked to contact the company to get a software upgrade offering additional security measures and they will receive a USB device to download the software upgrade.

By posting a comment you confirm that you have read and accept our Posting Rules and Terms of Use.
Advertisement
RELATED ARTICLES
Fiat Chrysler agrees to settle vehicle emissions scandal
Ram trucks recalled for faulty airbags
The Truth About the Light Vehicle Diesel Engine in Three Minutes
Fiat Chrysler CEO Has Died
Waymo Purchasing Up to 62,000 Chrysler Pacifica Hybrid Minivans
Advertisement