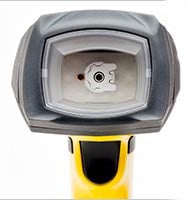 Barcode scanners are designed to read imprinted bar/matrix code symbologies. The device consists of a light source, a lens and a light sensor translating optical impulses into electrical ones.

Barcodes, also known a universal product codes (UPCs), are machine-readable data representations made up of bars of dark and light areas which represent a set of data, often a string of numbers. These codes are printed by a standard printer onto a label or other visible surface.

(Find Barcode Scanners by Specification or the IHS Directory of suppliers.)

Codes may also contain check digits at the beginning and end of the code. These are a form of redundancy check used for error detection and are used to ensure the code is read correctly.

Check digits can be implemented in a number of ways. For example, a three-digit code might be a code of 123 with a check digit of 6. The complete code would therefore be 1236 and the scanner would know that the code should always have three digits that add up to the fourth digit.

Actual barcode checks are much more complex and many different encoding schemes exist, though the reader must know the code standard to be able to read the code.

Reading a barcode involves a method to detect the code and transform it into a digital representation. The most common method uses light that is aimed onto one part of the code at a time and detected by a light sensor that reads the reflected light. (Watch a video on how it works)

A dark area will not reflect as much light as a light colored area. The difference is detected with the sensor and sent to the computer. The code is determined by the thickness and spacing of the dark and light areas. A very basic barcode scanner uses a single LED light and light sensor. In this case, the user would need to slide the reader directly over the code.

More advanced readers use a laser beam that is automatically scanned over the code with a rotating mirror to illuminate one part of the code at a time. Other methods include a camera to see the code which is interpreted into the corresponding light and dark areas.

Barcodes scanners consist of a scanner, a decoder (either built-in or external), and a cable used to connect the reader to a computer. The scanner captures and translates the bar code into numbers and/or letters. The data is then sent to a computer and analyzed by a software application. 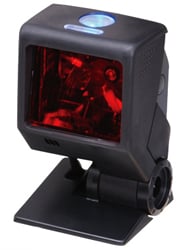 Honeywell's 3580 Quantum T omnidirectional laser scanner. Source: HoneywellThere are several types of barcode scanners, some of which are listed below.

Active non-contact or near-contact scanners may be stationary as an option. Gun type readers can also be fitted with optional fixed mounting.

There are several specifications to consider when selecting a barcode scanner: light source, laser class, and barcode symbologies.

Barcode scanners can be configured to recognize a variety of barcode symbologies. These include, but are not limited to, Codablock, Codabar, Code 1, 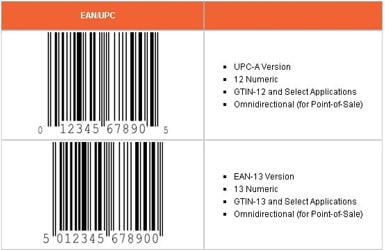 Barcode scanners can be equipped with one of two basic user interfaces, including keyboard connection and RS232 serial.

Other user interfaces include:

Barcode scanners must adhere to certain standards and specifications to ensure proper design and functionality. Additional standards may be found on the IHS standards store.

By posting a comment you confirm that you have read and accept our Posting Rules and Terms of Use.
Advertisement
RELATED ARTICLES
Bars and stripes forever: How bar codes changed supply chains
Innovation Could Lead to Less Expensive LIDAR for Automotive Use
Scanner Gloves Simplify Audi's Operations
Omron to Display Vision, Flexible Manufacturing, Traceability and Safety Solutions at IMTS 2018
Video: Team to track objects via invisible labels
Advertisement