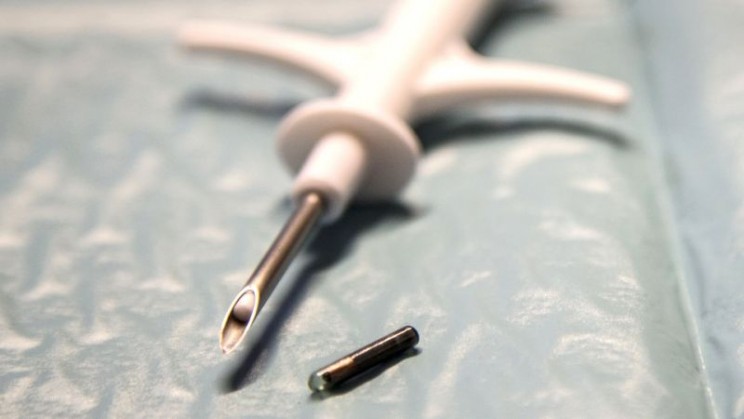 Source: BiohaxAs more companies consider microchipping their employees, arguments against the trend are emerging from both employers and trade unions in the United Kingdom.

According to recent reports, the U.K.’s Trades Union Congress along with the CBI (which represents British businesses) have spoken out against microchips implanted into employees as a replacement for identification cards that grant entry through secured doors.

Concerns are emerging that the purpose of microchipping employees could be expanded to controlling and potentially surveilling employees. Likewise, the trend also raises concerns about issues associated with human dignity and health.

Surveillance in the workplace is nothing new, as technology has long been employed to monitor productivity — from wearables that track employees to radio tags on factory products to gauge an employee's productivity on the assembly line — but the microchip is not a device that is easily removed, suggesting a heightened degree of monitoring and control.

Hardly menacing in size (typically the size of a grain of rice), the implant is inserted directly under the skin between the forefinger and the thumb, enabling employees to enter buildings or to use vending machines with a simple swipe of the hand. A number of companies have found value in such a system, which eliminates the need for employees to carry around cumbersome ID badges or key fobs. Another benefit: better control over employees accessing sensitive data. Consequently, companies who value the chips are likely to promote their use in a passive way.

Yet, technology that even hints at the suggestion of such monitoring, according to experts, can diminish an employee’s trust in a company, thereby threatening employee creativity, motivation and productivity, not to mention personal well-being.

Another concern about microchipping employees, according to some research, is the relative ease with which this technology can potentially be hacked, leaving the company vulnerable to security risks as well as increasing the opportunity for identity theft, which is a threat to an employee’s personal security.

Also concerning is that, once introduced into the body, the chips can be reprogrammed for motives such as tracking employee whereabouts after business hours or other sinister purposes that would violate an employee’s right to privacy. Information gathered from the implant, such as how an employee spends time outside of the office, might be used to discriminate against the employee.

Although often pitched to employees as voluntary, employees could also potentially feel pressure to accept implants out of fear of reprisal from management.

Considering that such technology is relatively new, little is known about the mental and physical health and safety implications of implanting employees with microchips. In terms of mental health, employees might modify habits out of fear of being monitored and thus experience higher levels of stress and anxiety. Additionally, little is known about the surgical intervention necessary to remove the microchips, particularly those that have drifted, wandering away from the original implant site.

While employees in both the European Union and the United States are afforded some levels of privacy and could object to microchipping on legal grounds, it is becoming more and more acceptable for private companies.

Re: Emerging Arguments Against Microchipping Employees
#1

Will "eye scanners" lead to people having their eyes gouged out so that thieves can gain access to secure areas?

Re: Emerging Arguments Against Microchipping Employees
#2

As has been previously foretold / Revelation 13.7

Re: Emerging Arguments Against Microchipping Employees
#3

If micro-chipping is a necessity for participating in the business, one always has the opportunity to walk away beforehand. Not to do so implies consent.

Re: Emerging Arguments Against Microchipping Employees
#4

Re: Emerging Arguments Against Microchipping Employees
#5

Whoever wrote this comes off to me like they just dropped on to this planet from outer space or has been living in a closet all his life. Are you kidding me? The head says "Emerging Arguments...". Gee whiz, this stuff has been talked to death for as long as I can remember. That they want to justify it by saying I.D. Badges are cumbersome? Really? Are we supposed to take that seriously?

You will be hard pressed to get Americans to get "chipped". Here, it is for the dogs.

See the entire discussion on CR4, the Engineering Community
Advertisement
RELATED ARTICLES
Some U.K. Companies to Consider Microchipping Employees
Can creativity follow a schedule?
Report suggests that Amazon autonomously tracks and terminates low-producing employees
How factory workers can de-stress after a long shift
Benefits Losing Favor in the Workplace
Advertisement