Scientists at the City University of Hong Kong have developed a tiny, soft robot with multiple legs that can carry heavy loads and is adaptable to harsh environments.

The robot could be a way to develop new healthcare technology such as drug delivery in the human body.

The multiple legs on the robot help to reduce friction so that the robot can move efficiently inside surfaces of the body lined with or entirely immersed in bodily fluids such as blood or mucus.

Much like a caterpillar, the soft robot consists of hundreds of less than 1 mm long pointed legs while the body thickness measures about 0.15 mm, with each conical leg measuring 0.65 mm long and the gap between the legs about 0.6 mm. Tests of the robot show that it has 40 times less friction than a limbless robot in both wet and dry environments. 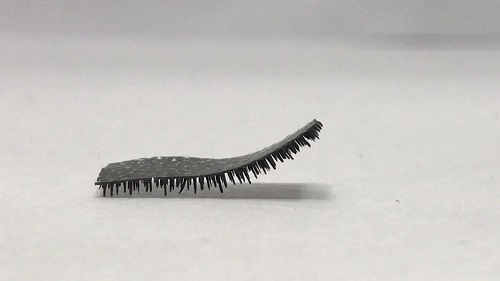 The tiny multi-legged robot has 40 times less friction than a limbless robot. Source: City University of Hong KongThe robot was fabricated with a silicon material called polydimethylsiloxane (PDMS) embedded with magnetic particles that allow it to be remotely controlled by applying electromagnetic force. In experiments, the robot can move in both a flap propulsion pattern and an inverted pendulum pattern, meaning it can use its front feet to flap forward as well as swing the body by standing on the left and right feet alternately to advance.

During testing, the robot showed it was capable of carrying a load 100 times heavier than itself. This, combined with its ability to withstand harsh environments, makes it suitable for healthcare applications such as delivering a drug to a designated spot through the digestive system or carrying out a medical inspection.

The next steps will include refining the research into three aspects: Finding a biodegradable material, studying new shapes and adding extra features.

The full research can be found in the journal Nature Communications.

By posting a comment you confirm that you have read and accept our Posting Rules and Terms of Use.
Advertisement
RELATED ARTICLES
3D Printed Soft, Hopping Robot
Small robot operates without any electronics
Small robot can overcome objects larger than itself
Video: Starfish robot designed for underwater applications
Team Builds Creeping, Crawling, Climbing Robot
Advertisement