The company, led by MIT Chemist Donald Sadoway, has been at work applying molten oxide electrolysis since its 2012 founding. A pending funding round could move the company into an exciting demonstration phase, involving construction of an industrial-scale steel production cell.

Sadoway accidentally invented molten oxide electrolysis over a decade ago. While working on a means for extracting oxygen from the moon’s surface in response to a $250,000 NASA prize, he discovered that using an electrolytic cell for this purpose produced a molten metal byproduct. Sadoway quickly realized that a battery-like electrolytic cell could be used to process metals.

Traditional steelmaking involves placing iron oxide in a blast furnace with coke, a hard, coal-derived substance. The furnace turns the coke to carbon monoxide, which pulls oxygen from the iron, producing pig iron as well as carbon dioxide byproducts. This and other steelmaking processes account for around 5% of total annual CO2 emissions.

Eliminating these emissions demands either capturing the carbon dioxide before it leaves the mill, which is technically difficult and expensive, or using an alternate means for pulling oxygen from the iron oxide. Sadoway discovered that placing molten metal between an electrolytic cell’s chromium anode and cathode and applying an electric current causes oxygen to bubble off the metal and towards the top of the cell. Molten pig iron then flows to the bottom of the cell. 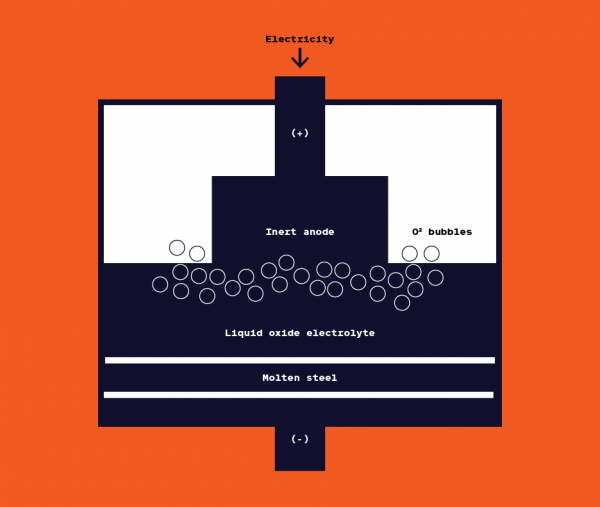 A downside to the process, besides its costs and the requirement of a large anode, is the lack of carbon, which naturally strengthens steel during the production process. Boston Metal said additives like carbon could be added to the cell’s molten product at a later time in the process.

Boston Metal has raised $13 million in funding sourced from a Brazilian investor, the U.S. Department of Energy and the National Science Foundation. The company is withholding the name of a pending investor, whose funding could allow large-scale demonstrations, until that transaction is finalized.

By posting a comment you confirm that you have read and accept our Posting Rules and Terms of Use.
Advertisement
RELATED ARTICLES
Salt-based Battery Improves Renewable Battery Performance for Electric Cars and Solar Cells
Ironmaking 101 – From Ore to Iron with Blast Furnaces
What's 'Good Quality' Steel and How Do You Achieve it?
Ironmaking 101 – From Ore to Iron with Smelting and Direct Iron Reduction
Technology and Processes Behind Steel Production
Advertisement