Are Carbon Nanotubes More than Just a Yarn?

A carbon nanotube (CNT) is a cylindrical allotrope of carbon, essentially a sheet of graphene (a single-layer hexagonal lattice of carbon) rolled into a cylinder. Since its discovery in 1991, much has been made of its potential applications. Its high conductance and high electron mobilities have tantalized engineers with the possibilities of future electronics applications. CNT’s physical strength has led to predictions of new materials, particularly super strong threads, yarns and cables. Although progress has been made in the laboratory, industrialized production of CNTs has been elusive. 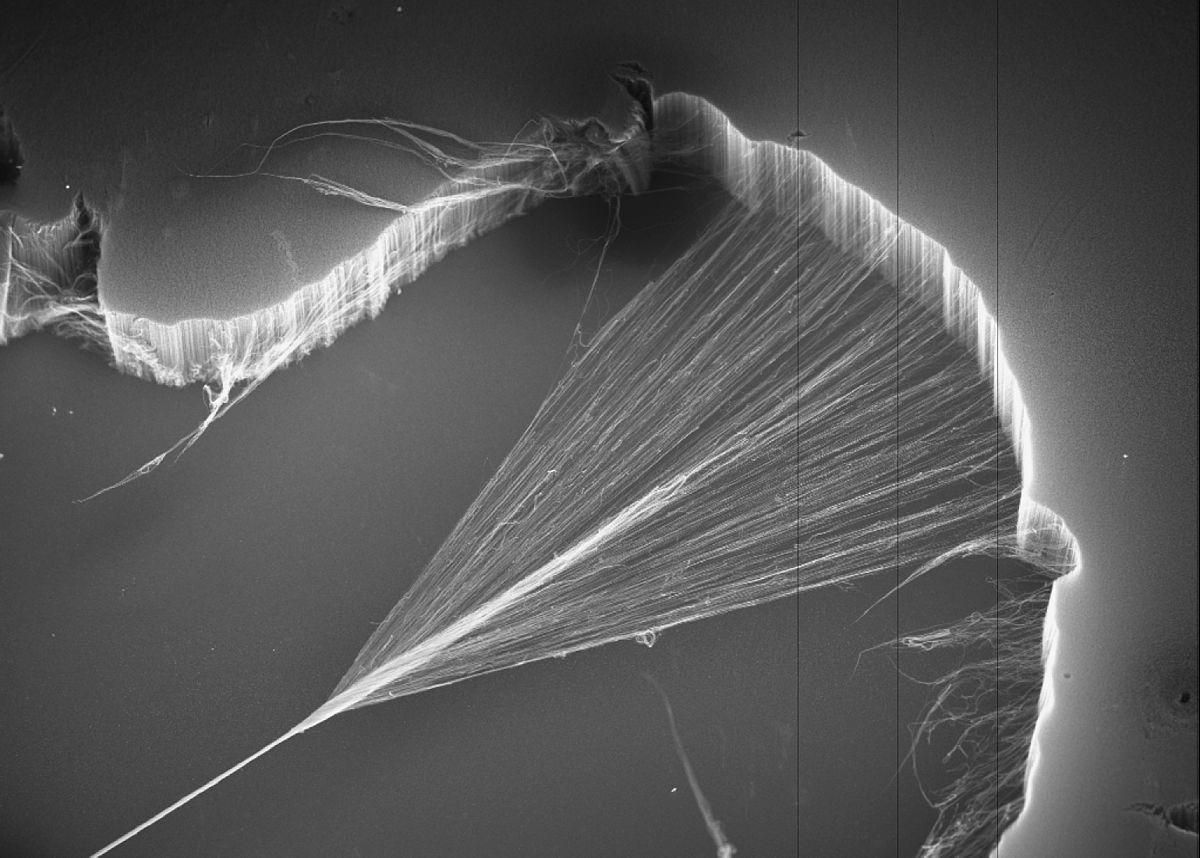 Carbon Nanotubes being spun into a yarn. Source: CSIRO / CC BY 3.0CNTs can be millimeters long with sub-nanometer diameters. Such extreme ratios can have interesting properties. Last year, researchers from The University of Texas at Dallas and Hanyang University in South Korea developed CNT yarns that generated electricity when stretched or twisted. Called twistron yarns, they are being touted by the researchers for their potential to harvest energy from waves in the ocean or temperature fluctuations.

Dr. Ray Baughman, a coauthor of the researchers explains, “If our twistron harvesters could be made less expensively, they might ultimately be able to harvest the enormous amount of energy available from ocean waves.”

Scaling up production and lowering costs has been the chorus refrain of the 27-year-old CNT saga. A pattern has emerged where impressive microscopic or mesoscopic properties are demonstrated which generates excitement, then nothing happens as scaling remains elusive. In many ways, CNTs are the 21st century analog of 19th century aluminum.

In the mid-1800s, scientists and engineers understood the remarkable electrical and mechanical properties of aluminum. It was generally accepted that it would be an important material in the future. The problem at that time was it cost so much to produce it was worth more than gold. Aluminum is the third-most abundant element found in the Earth’s crust. However, as it is usually contained in salts, it was difficult to extract. Scientists worked on developing a process, but it took many years after first isolating aluminum before an inexpensive electrolysis process was developed by Charles Hall and Paul Heroult, each independently, in 1886. Within 30 years aluminum had revolutionized building materials, food packaging and transportation. Charles Hall started the Pittsburgh Reduction Company in 1888 which was reorganized into the Aluminum Company of America, also known as Alcoa, in 1907. Today, Alcoa has a market capitalization of almost $8 billion.

Similarly, industrializing production of CNTs has been slow going. The promise of the material is universally accepted and funding is readily available for research. CNT threads have already been created that have three times the strength of Kevlar and the potential for an order of magnitude increase in that strength may be possible. The twistron yarn discussed earlier when stretched 30 times a second generates 250 W/kg of peak electrical power. That’s higher peak power than any other material at that frequency. Unfortunately, until scaled to industrial production, the impact of such exciting properties remains limited.

According to Global Market Insights, the CNT market is projected to cross $8 billion by 2024, with potential applications in automotive, transportation, aerospace, energy and infrastructure among others. It is only scaling issues that are holding that market back from being much larger. Much as in 1855, when Napoleon III offered aluminum utensils to favored guests and gold utensils to the rest, today CNTs are mostly an expensive novelty. The years of unfulfilled promises have dampened expectations and even created an air of cynicism regarding its true potential. However, the benefits are real, and when a successful industrial production method is discovered, the material will likely be integrated into society with the same speed and comprehensiveness as aluminum was a century ago.

Where aluminum made possible everything from skyscrapers to flight, CNTs will make possible space elevators and powerful electronics, along with many other unimaginable applications. Whomever discovers and patents a means to produce industrial grade CNTs will likely become very rich. It is easy to dismiss CNT headlines that tout miracle properties with no tangible commercial results. However, it is clear that with so much potential it’s just a matter of when, not if. The day may come soon when a breakthrough is made and the world will likely never be the same afterward.