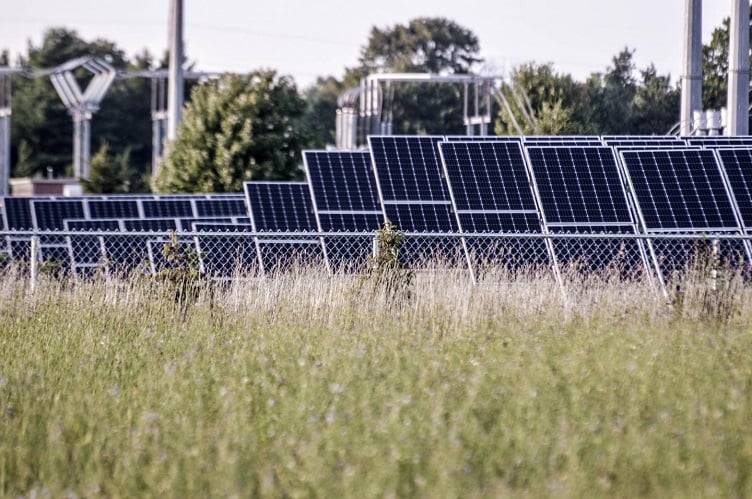 Given the concern regarding climate change as well as the rise of pollution in urban areas, interest in creating zero-emission energy — whether through solar, wind or hydroelectric means — is at an all-time high.

While switching to more renewable sources of power is one route, other routes include developing technology to capture carbon directly at the source of these fossil fuel-burning plants or through bio-sequestration — a process of capturing and storing greenhouse gas carbon dioxide through practices such as reforestation, soil carbon trapping in agriculture or through saline aquifers.

A new study from researchers at Michigan Technological University looked into how much land it would take of offset greenhouse gases created by traditional coal-fired plants or coal-fired plants with carbon sequestration and then neutralizing the remaining carbon pollution with bio-sequestration. The researchers then compared these routes to how much bio-sequestration would be required to offset greenhouse gases produced by solar panels.

The result is that coal-fired power plants would require 13 times more land to be carbon-neutral than solar panels and solar farms. It would take a minimum of 62% of U.S. land covered by carbon-soaking crops or 89% U.S. forest coverage to do it. 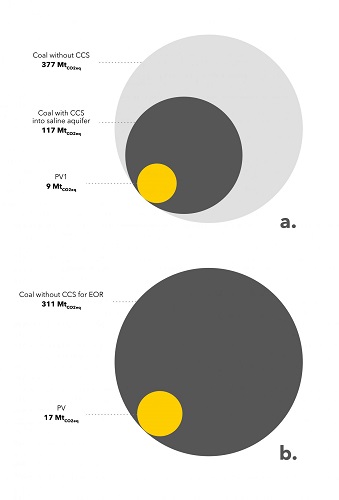 Breakdown of the bio-sequestration need between coal-fired power and solar. Source: Michigan Technological University "We know that climate change is a reality, but we don't want to live like cavemen," said Joshua Pearce, professor of material sciences and electrical engineering at Michigan Tech. "We need a method to make carbon-neutral electricity. It just makes no sense whatsoever to use coal when you have solar available, especially with this data."

One coal-fired plant producing 1 GW of energy would require a new forest larger than the state of Maryland for all its carbon emissions to be neutralized.

"If your goal is to make electricity without introducing any carbon into the atmosphere, you should absolutely not do a coal plant," Pearce said.

Pearce added that not only does burning coal release carbon dioxide into the air, it also puts sulfur dioxide and nitrous oxide as well as other particulates into the air.

Researchers said that solar farms are already more efficient and could be made even more efficient if energy companies would use high-efficiency black silicon solar cells, put mirrors in-between rows of panels so that light that falls between them would be absorbed and plant crops between rows to get the more use out of the land dedicated to solar panels.

In order to move further toward carbon-neutral energy generation, researchers suggest moving away from coal-fired power plants and improving solar panels and solar farms. This could go a long way towards combating the effects of climate change.

..."It just makes no sense whatsoever to use coal when you have solar available,"...

You mean other than the reliability, the most important thing really....I think the opposite is true, base load reliability is essential to modern life and solar energy does not provide reliable base load electricity generation, it provides intermittent generation....and I might mention here you do not seem to include end of life recycling for solar panels, as part of the equation...and no mention of nuclear at all...? To make solar energy viable as base load, you need storage, add in the cost of batteries in the equation and we'll talk, both installed costs and recycling costs, and let's compare maintenance costs as well...

Re: Coal-fired Power Plants Require 13 Times More Bio-Sequestration to be Carbon Neutral than Solar
#2
In reply to #1
IdeaSmith

Looks like there is no rating system here. So just in written form:

your post sums it pretty much up what is still missing in this discussion.

I have the feeling that we have to sacrifice the reliability part for the sake of the carbon unfriendly gods. At least this is what are constantly being asked for when the solar club comes out.

Bang, take this, take solar and do not question it, bang, who cares about reliable if we can safe the planed some 3% more carbon.

Now that solar and wind power does change the climate shall we take a step back and reconsider what we are doing?