Watch: Beer-based Aerogel is Out of This World

Aerogel materials offer practical applications in energy conservation, such as thermally insulating films for enhancing the energy efficiency of windows. These lightweight gels are made by crisscrossing patterns of solid material that trap air inside tiny pores, imparting superior insulating properties. However, this process also results in low opacity, precluding the use of aerogels to trap and store solar heat.

This obstacle was overcome by linking cellulose fibers into a uniform, lattice-like pattern. The aerogel engineered at the University of Colorado Boulder is sufficiently transparent for window applications.

The researchers celebrated their discovery by turning to beer, or rather the waste liquid produced during the brewing process. Such beer wort can generate cellulose with the addition of specialized bacteria in a process that keeps the waste out of landfills. The cellulose requires about two weeks to culture, after which a thin flexible film that is about 100 times lighter than glass is fabricated.

The film could be applied to commercial and residential windows to improve building energy efficiency. Extraterrestrial applications are also envisaged, including its use on the windows of space habitats to provide thermal insulation and solar harvesting services. 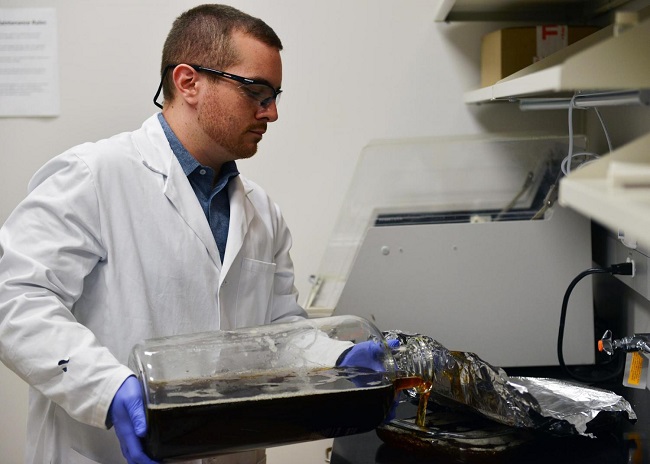 Beer wort is poured into a tray before adding cellulose-producing bacteria. Source: University of Colorado Boulder