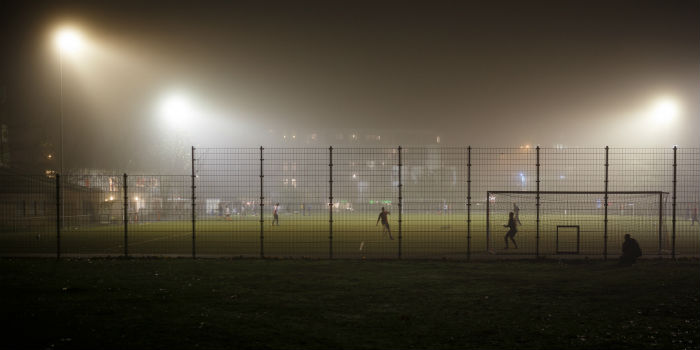 On the left are the traditional stadium lights on a football field and to the right are the new lights. Source: Robert Anders, DTUAs the number of outdoor sports arenas and stadiums increase, often in the middle of well-populated areas, so to do the complaints about their bright lights. As such, a researcher from DTU Fotonik has helped develop a solution: a new lens.

Henrik Chresten Pedersen developed a lens that would keep the light focused only on the field while consuming less power.

“It hasn’t previously been possible to use the energy-saving LED technology for sports fields because the LED lights couldn’t be made to light only the field while mounted on tall masts. Fortunately, we’ve now solved this problem so the lens now not only reduces light pollution but also power consumption,” Henrik explained.

This new lens, which is made from acrylic, is fixed to the front of an LED bulb where it ensures that the light is directed entirely on the field. In so doing, light pollution is reduced by 90 percent while energy consumption is reduced by almost 50 percent. Additionally, the new LEDs last longer than traditional bulbs.

“The LED light bulbs last, on average, 50,000 hours, whereas the old halogen light bulbs only lasted approx. 1000-3000 hours. It’s a great advantage that the light bulbs last as long as they do, because it’s quite difficult to change a light bulb on an 18 meter mast,” says Henrik.

To incorporate the new lighting, the acrylic lens lights were built into panels of custom-designed lamps and mounted on masts in fields in Roskilde and Himmelev-Veddelev Boldklub (Himmelev-Veddelev football club).

“We are very excited about our new lights. They’re much more clear. Previously the lights would only cover parts of the field, but now the whole field is properly lighted. It’s a notable improvement from the old lighting, which consisted of halogen light bulbs. And the light no longer bothers the neighbours,” says chairman of the Himmelev-Veddelev Boldklub, Carsten Reinholdt.

By posting a comment you confirm that you have read and accept our Posting Rules and Terms of Use.
Advertisement
RELATED ARTICLES
Big Buildings More Likely to Use Lighting Strategies: Report
An Incandescent Light Bulb as Efficient as an LED?
Michigan Food Banks to Distribute LED Bulbs
Smart Light Bulbs Hacked
The search for better LED light bulbs
Advertisement