Much research has been devoted to exploiting fly ash as an alternative binder, but its current role in industry is largely restricted to the supplementary use, which enables only partial replacement of conventional Portland cement. A cost-effective binder material for this application has been developed at Rice University.

The composite binder composed primarily of fly ash, a coal-fired power plant byproduct, was engineered to 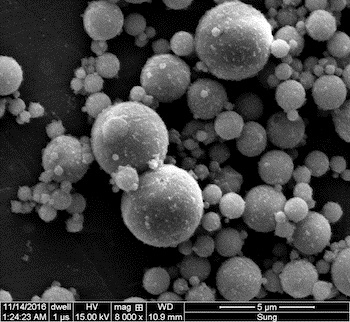 A scanning electron microscope image shows spherical particles in type C fly ash used to make cementless binder for concrete. Source: Multiscale Materials Laboratory/Rice Universityreplace Portland cement in concrete. Fly ash comprises 76.4‐80.3 percent by the total mass of the constituents, while calcium oxide, nanosilica and the minimum amounts of sodium‐based activators are added to induce early‐age strength development. Manufacturers often include 5-20 percent fly ash as a supplement to Portland cement in concrete, but a significant portion of the mix is still cement.

The use of fly ash binder eliminates the high-temperature processing of Portland cement, and tests show it has the same compressive strength after seven days of curing. It also requires only a small fraction of the sodium-based activation chemicals used to harden Portland cement.

The researchers used Taguchi analysis, a statistical method developed to narrow the large phase space — all the possible states — of a chemical composition, followed by computational optimization to identify the best mixing strategies. The evaluation improved the structural and mechanical qualities of the synthesized composites and resulted in an optimal balance of calcium-rich fly ash, nanosilica and calcium oxide with less than five percent of a sodium-based activator.

The impressive early‐age strength coupled with the significantly decreased amount of sodium‐based chemicals and a reduced carbon dioxide footprint is expected to benefit the development of low‐cost, environmentally friendly binder in various industries.

The research is published in the Journal of the American Ceramic Society.

By posting a comment you confirm that you have read and accept our Posting Rules and Terms of Use.
Advertisement
RELATED ARTICLES
Researcher Tests Fly Ash for Stronger Concrete
Toward an Environmentally-friendly Concrete
Fly Ash Concrete is Eco-Friendly and Stronger than Traditional Concrete
Furnace Waste Prevents Salt Deterioration of Roads
Eruptive Technology: Volcanic Ash Boosts Sustainability of Concrete
Advertisement