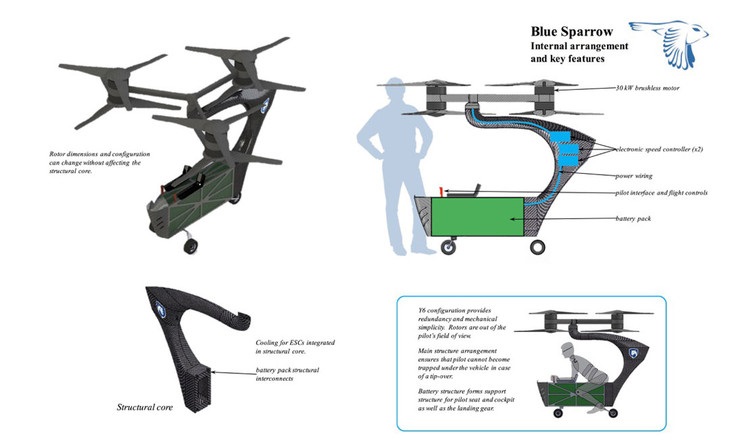 The GoFly Prize, a two-year international competition backed by Boeing and other corporate sponsors, aims to foster the development of a different kind of flying machine that’s designed to carry a single person. In Phase 1 of the competition, teams were required to design user-friendly, one-person vehicles capable of making vertical or near-vertical takeoffs and flying for 20 miles.

Ten Phase 1 winners were selected to receive prizes of $20,000 each, plus advice from business and technical mentors for the next phase of development. One of the winners is the Blue Sparrow team from Pennsylvania State University, which selected a battery-powered multirotor configuration for its vehicle. The Y6 configuration arranges a set of six motors and rotors in three stacked coaxial pairs, with each pair at the end of a Y-shaped frame. Each motor will have independent electronic speed control.

The design provides good controllability and reduces the power required to fly within the size constraints imposed by the competition. Redundancy improves flight safety, as flight can be maintained even in the event of a motor failure. The virtual cage formed by positioning the motors above and the battery below the pilot also lends an element of safety in terms of pilot protection.

The student designers will implement a simple flight-critical stability and control system design to enhance safety through health monitoring, pilot cueing and autopilot functions. The sophisticated operator interface will include an augmented reality-based flight display that will dovetail with a virtual reality-based simulator for training.

The team will next prototype and test the vehicle drive system, including motors, rotors, speed controls and battery; conduct flight simulations in the new Penn State Motion-base Flight Simulator Lab; and build a working subscale vehicle.

In March 2019, GoFly will announce four winners of Phase II, based on a VTOL demonstration, revised Phase I materials, and a status report providing proof that a prototype, demonstrator or the device itself has flown and successfully performed a minimum number of required maneuvers.

The Final Fly-off is scheduled for October 2019, when teams will debut their personal flying devices and vie for the $1 million grand prize.