Watch: NASA is Sending a Helicopter to Mars

NASA plans to include a small, autonomous helicopter in the agency's upcoming Mars 2020 rover mission. The Mars Helicopter will undergo a 30-day test campaign once it reaches its destination to demonstrate the viability 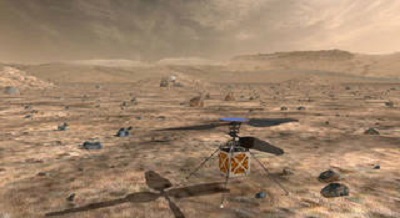 The Mars Helicopter, a small, autonomous rotorcraft, will travel with the agency's Mars 2020 rover, currently scheduled to launch in July 2020, to demonstrate the viability and potential of heavier-than-air vehicles on the red planet. Source: NASA/JPL-Caltechof flight above the Martian surface with a heavier-than-air craft.

The result of four years of design and testing at NASA’s Jet Propulsion Laboratory, the craft weighs in at a little under four pounds (1.8 kg). The softball-sized fuselage sports twin, counter-rotating blades engineered to operate in the thin Martian atmosphere at almost 3,000 rpm — about 10 times the rate of a helicopter on Earth. Solar cells will charge its lithium-ion batteries and a heating system will protect the helicopter on cold Martian nights.

The rover will deposit the Marscopter on the surface after which its batteries will charge and Earth-bound controllers oversee its first autonomous flight involving a 10 ft (3 m) vertical climb, where it will hover for about 30 seconds. A successful mission will show that helicopters may have a real future as low-flying scouts and aerial vehicles to access locations not reachable by ground travel.

Mars 2020 is scheduled to launch in July 2020 on a United Launch Alliance Atlas V rocket from Space Launch Complex 41 at Cape Canaveral Air Force Station in Florida, and is expected to reach Mars in February 2021.

By posting a comment you confirm that you have read and accept our Posting Rules and Terms of Use.
Re: Watch: NASA is Sending a Helicopter to Mars
#1

Maybe they can use it to blow the dust off the Rovers solar panels?

Re: Watch: NASA is Sending a Helicopter to Mars
#2

Why not use dirigible balloons like zeppeling tied to the rover so that the wind does not carry it and lose it. The rover can bring him back when he needs it. the rope can be large as possible and back to the rover using electrical winch. Will have control, less energy, more time flying. The height control will be little complex with temperature but technically solvable.