The Leaning Tower of Pisa should have fallen a long time ago. Since the middle ages, multiple strong earthquakes have hit the area, yet the tower is still standing—albeit leaning. The mystery behind how the structure hasn’t crumbled was solved by a group of 16 researchers, including an expert in earthquake engineering and soil-structure interaction from the University of Bristol. 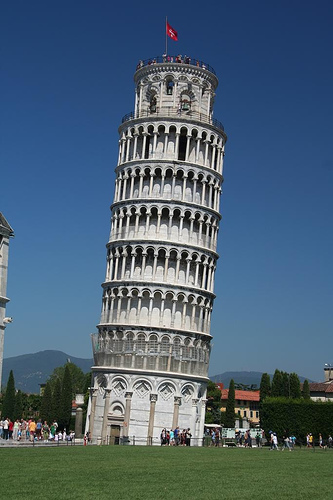 Professor George Mylonakis, from Bristol’s Department of Civil Engineering and Professor Camillo Nuti from Roma Tre University have teamed up with other researchers to find the answer.

The Leaning Tower of Pisa leans at a five degree angle. This leads to an offset at the top of over five meters. The 58-meter tall Tower has survived four strong earthquakes that have hit its hometown since 1280.

Because of the angle, the tower barely manages to stand vertically and should crumble at even a moderate seismic activity. After focusing on all the seismological, geotechnical and structural information available, the team found that the Tower has been able to survive until now because of dynamic soil-structure interaction (DSSI).

The height and stiffness of the Tower and the softness of the foundation soil cause vibrational characteristics within the tower to be modified in a certain way so the Tower doesn’t resonate with the ground when there is a serious earthquake. This, combined with the way that the Tower leans and other characteristics, gives the Leaning Tower of Pisa the world record in DSSI effects.

"Ironically, the very same soil that caused the leaning instability and brought the Tower to the verge of collapse, can be credited for helping it survive these seismic events,” said Professor Mylonakis who is chair in geotechnics and soil-structure interaction and head of earthquake and geotechnical engineering research group in the department of civil engineering at the University of Bristol.

The paper and the results from this study were presented at international workshops and will be presented at the 16th European Conference in Earthquake Engineering in Thessaloniki, Greece, in June 2018.