Steel Mesh Could Help Separate Oil from Water in a Spill

Researchers at Ohio State University have created a steel net that captures fossil fuel from a mixture of oil and water, letting the water pass through. The technique could make it easier to clean up oil spills. 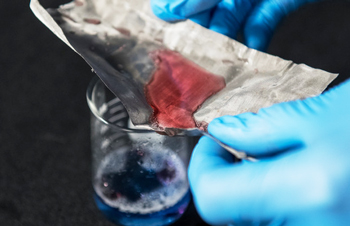 This mesh captures oil (red) while water (blue) passes through. Source: The Ohio State UniversityThe net was built by applying a nearly invisible oil-repelling coating to a stainless steel mesh. The design was inspired partly by the bumpy surface of lotus leaves, which naturally repel water.

To create a surface that does the opposite of lotus leaves—repels oil rather than water—research leader Prof. Bharat Bhushan and fellow researcher Philip Brown sprayed a fine dusting of silicon nanoparticles onto the stainless steel mesh to create randomly bumpy surface first. Then, they layered the surface with a polymer embedded with molecules of a surfactant—a compound that is found in detergent and soap.

“If you scale this up, you could potentially catch an oil spill with a net," says Bhushan.

The silica, surfactant, polymer and stainless steel are all non-toxic and relatively inexpensive, says Brown. He estimates that a larger mesh net could be created for less than $1.00 per square foot.

The mesh coating is among other nature-inspired nanotechnologies under the development of Ohio State and described in the journal Nature Scientific Reports.

By posting a comment you confirm that you have read and accept our Posting Rules and Terms of Use.
Advertisement
RELATED ARTICLES
Introducing Better Synthetic Leather to Withstand the Weather
Suicide Barrier Under Construction at the Golden Gate Bridge
Tunable Membrane Switches Between Oil or Water Removal
The Right Mesh for the Right Job
Remote Sensing Equipment Tested for Oil Spill Detection
Advertisement