The U.S. Nuclear Regulatory Commission (NRC) has completed the first and most intensive phase of review for NuScale Power’s design certification application (DCA). NuScale is the first and only small modular reactor (SMR) application to ever undergo NRC review. This major achievement brings NuScale Power closer to introducing the country’s first SMR to market, putting the U.S. on a path to beat foreign competitors like Russia and China at a global SMR race.

The NRC is expected to certify NuScale’s design, and the company’s first customer, Utah Associated Municipal 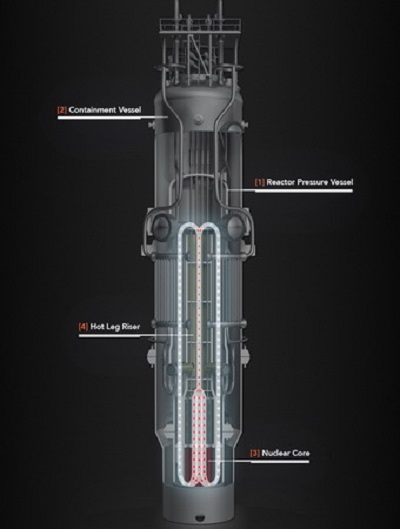 Schematic of the reactor. Source: NuScale PowerPower Systems, is planning a 12-module SMR plant in Idaho slated for operation by the mid-2020s based on this certified design.

During the 115,000 hours the NRC spent reviewing the DCA, it issued far fewer requests for additional information compared to other design certification applications, demonstrating the simplicity of the design and quality of the application.

The NuScale SMR is an advanced light-water reactor wherein each NuScale Power ModuleTM is a self-contained unit that operates independently within a multi-module configuration. Up to 12 modules are monitored and operated from a single control room.

By posting a comment you confirm that you have read and accept our Posting Rules and Terms of Use.
Advertisement
RELATED ARTICLES
NuScale Reactor Nears One Milestone, With More to Follow
NRC Accepts NuScale Reactor Application for Review
NuScale Boosts SMR Capacity, Making it Cost Competitive with Other Technologies
Sargent & Lundy enlists to back reactor development
Ontario Power Will Back NuScale's Canadian SMR Bid
Advertisement