Mapping the Potential of Carbon Capture and Sequestration for Ethanol Production 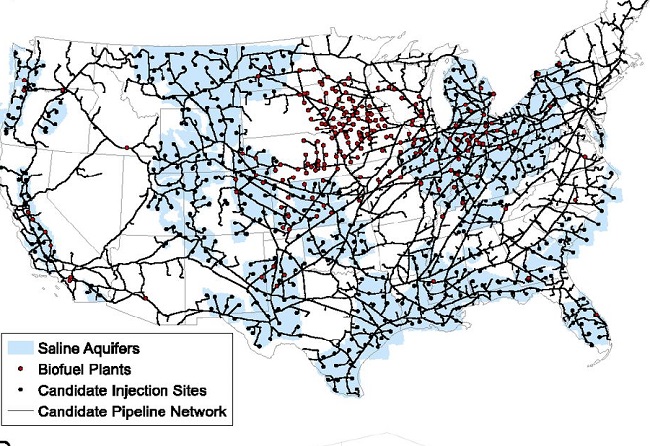 There are more than 200 existing U.S. biorefineries that emit 45 million metric tons (Mt) of carbon dioxide annually from fermentation. The near-term commercial prospects for capturing and storing this gas at U.S. ethanol biorefineries were analyzed by an international team of researchers. The modeling framework applied evaluates least-cost source-sink relationships and aggregation opportunities for pipeline transport, which can reduce the cost of transporting small CO2 volumes to suitable sequestration sites.

An assessment of CO2 capture costs, and not including pipeline construction or sequestering the gas, concludes that about 60 percent of current emissions, or 27 Mt/year, could be captured for less than $25 per metric ton.

A credit of $60 per metric ton of CO2 sequestered would be sufficient to cover the costs of capture, transport and sequestration for about 30 million metric tons of CO2 per year. This is estimated to result in the construction of 4,300 miles of pipelines.

In another scenario, a credit of $90 per metric ton to reduce emissions from ethanol production would result in the capture, transport and sequestration of 38 million tons of CO2 and drive construction of a comparably large pipeline network.

Bioenergy with carbon capture and sequestration (BECCS) is a promising means for CO2 removal, involving the capture and permanent sequestration of biogenic CO2 produced during energy conversion. However, most BECCS technologies today, such as gasification with pre-combustion CO2 capture, have not yet been demonstrated at commercially relevant scales.

But capture of biogenic CO2 from fermentation is unique, because unlike many other BECCS methods, it doesn’t require a costly separation of CO2 and can be applied at existing biorefineries. Practiced commercially for several decades, fermentation of sugars and starch produces more than 26 billion gallons per year of ethanol worldwide. Fermentation also produces a high-concentration (99 percent) gaseous CO2 stream consisting only of CO2, water and small amounts of organic and sulfur compounds. In fact, a U.S. Department of Energy supported project is capturing and storing around 1 Mt per year of CO2 in Illinois.

By posting a comment you confirm that you have read and accept our Posting Rules and Terms of Use.
Re: Mapping the Potential of Carbon Capture and Sequestration for Ethanol Production
#1

Here I sit on a -0.6C morning thinking with this CO2 capture has any thought been given to liquifying it and using it to replace some of the water used in the fracking process. Now here would be a valuable resource and maybe it would lessen the negative impact of fracking. After all breweries capture and liquify the co2 now for sale.

I believe it would be feasible for back in the early 80s on a well we drilled liquid N2 was used for test fracking.