Three unmanned aerial vehicle concepts are competing to win the U.S. Navy’s contract for an unmanned tanker capable of launching from seaborne aircraft carriers and refueling planes in the air.

Aerospace and defense firms Boeing, Lockheed Martin and General Atomics each submitted airframe proposals on January 3 to meet the Navy’s need for a carrier-based tanker-drone dubbed the MQ-25 Stingray. The winning design could be selected as early as this summer.

The Navy’s requirements for the Stingray call for a fuel-transport capability of around 15,000 pounds to a range of 500 nautical miles from the carrier. This will enable combat radius extensions of Navy aircraft, including that of the F/A-18 Super Hornet from 450 to 700 nautical miles. The MQ-25 must be able to refuel all types of the Navy’s in-service aircraft.

Details on each of the companies’ unmanned prototypes continue to trickle out, illuminating various aspects of the vehicles’ designs.

Lockheed Martin’s MQ-25 concept was developed by its Skunk Works® division, the same group working on the SR-72 hypersonic aircraft. The flying wing configuration advances existing Lockheed Martin designs such as the RQ-170 Sentinel stealth reconnaissance UAV. A dorsal intake near the nose of the plane collects air to feed the engine, which exhausts to the rear of the fuselage. A ventral tank mounted at the center of the aircraft’s belly carries fuel. The vehicle also includes technologies from the F-35C Lightning II.

Boeing is so far the only competitor that has revealed an actual demonstration aircraft. The company’s MQ-25 prototype was developed by Boeing Phantom Works, the research and development division of Boeing responsible for working on a number of classified military projects. The concept features a wing-body-tail design with slender main wings swept slightly to the rear where two horizontal stabilizers are canted outward. The aircraft is an evolution of Boeing’s Phantom Ray stealth unmanned combat air vehicle, which itself was based on the company’s X-45C prototype. 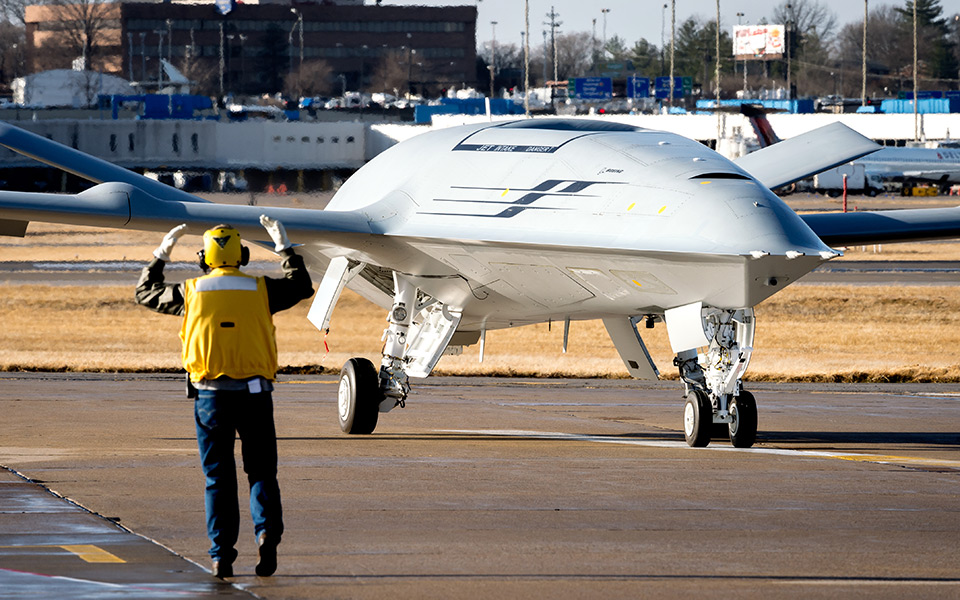 General Atomics’ MQ-25 bid draws on the company’s past experience building drones for the U.S. Air Force. Its wing-body-tail design is based on the Predator C Avenger remotely piloted UAV which was developed from the MQ-1 Predator and MQ-9 Reaper drones. The fuel-carrying requirement is satisfied by pods mounted under each main wing, which are capped by winglets. Two tailplanes angle outward into a V-shape at the plane’s rear. 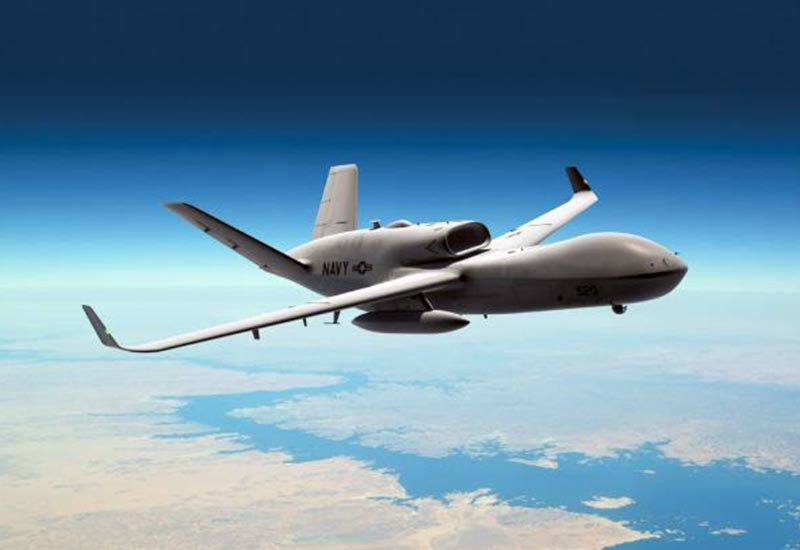 A fourth competitor, Northrop Grumman, removed its bid from the competition in October 2017, saying it would not be able to fulfill the Navy’s terms of service. The company had planned to develop an MQ-25 candidate by modifying its prototype X-47B combat UAV. 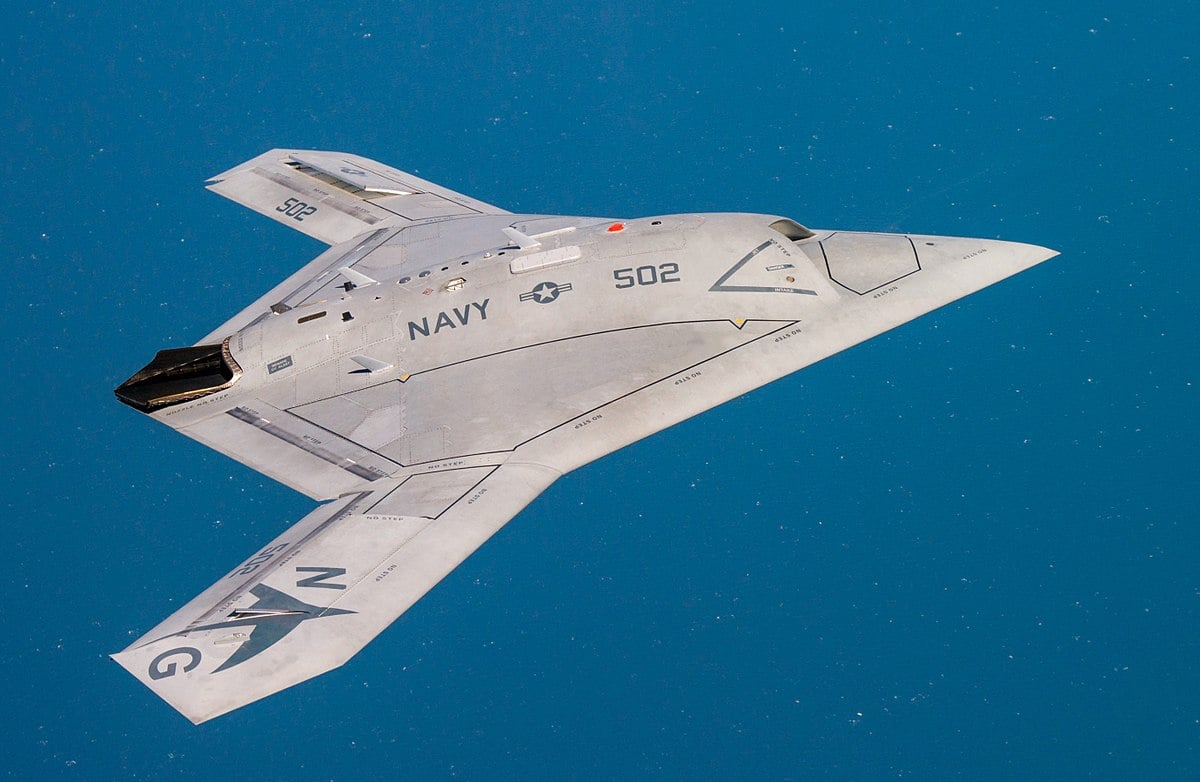 Northrop Grumman intended to develop its X-47B demonstration vehicle into a battlefield-ready MQ-25 before dropping out of the competition in 2017. Source: U.S. Navy

The MQ-25 program started out as a request for proposals in June 2013 by the U.S. Navy for an Unmanned Carrier-Launched Airborne Surveillance and Strike (UCLASS) aircraft with both intelligence and attack capabilities. The program switched to focus on a Carrier-Based Aerial-Refueling System (CBARS) in February 2016 when the requirement for strike capabilities was put on the back burner to be potentially included in future design iterations of the plane. The UAV took on the official title of MQ-25A Stingray in July 2016.

The winning contractor is responsible for designing and building the MQ-25’s airframe. Development of ground control infrastructure and communications links as well as overall systems integration for the aircraft will be handled by the Navy. The service made significant progress on that task in 2013 and 2014 when it carried out test launches and recoveries of an X-47B on a carrier.

Current plans call for procurement of seventy-two MQ-25s for active service aboard Navy carriers. Deployment of the Stingrays will free up F/A-18s that are currently configured for aerial refueling missions, allowing their conversion back into combat configurations.

By posting a comment you confirm that you have read and accept our Posting Rules and Terms of Use.
Advertisement
RELATED ARTICLES
Boeing Unveils a Drone Capable of Landing on an Aircraft Carrier
Boeing to Build Unmanned Aerial Refueler Drone for U.S. Navy
Aircraft Carrier Techniques Applied to Drone Launch and Recovery
High-Energy Laser Weapons Take to the Skies
Drone Launch from AUV Demonstrated
Advertisement