Protective Coating Material for Metal is Self-Healing, Liquid-Like and Made of Aluminum Oxide

A solid oxide protective coating has been discovered for metals to protect against any gaps or cracks that pop up over time with regular wear and tear. When this coating is applied in thin layers that will twist with the gaps and crack as they are forming, instead of needing to be applied to the damage as it forms. 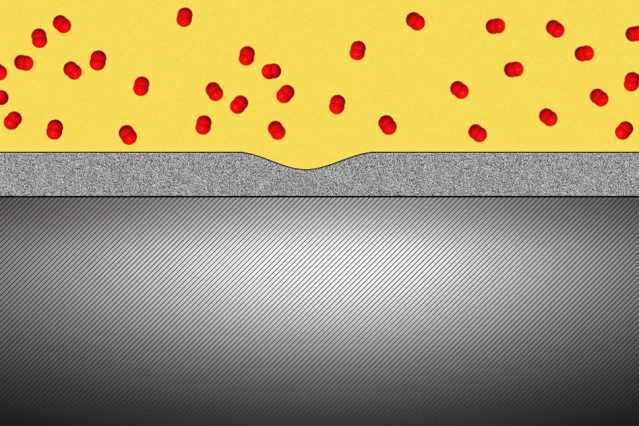 Researchers have found that a solid oxide protective coating for metals can, when applied in sufficiently thin layers, deform as if it were a liquid, filling any cracks and gaps as they form. (Source: Christine Daniloff/MIT)

With a few exceptions, all metals oxidize when exposed to air and water, producing negative effects like rust, tarnish, verdigris, cracks, structural failure or generally weakened material. The new material is made of three materials that are a protection barrier from oxidization — aluminum oxide, chromium oxide and silicon dioxide.

Jul Li, professor of nuclear engineering and science at MIT and senior author of the paper, said, "We were trying to understand why aluminum oxide and silicon dioxide are special oxides that give excellent corrosion resistance."

Yang Tang, MIT graduate student, led the research team while developing the new material. The team used specialized instruments so they could observe the surface of metals that used the new coating. They wanted to see what exactly happens when the new metals are in an oxygenated environment under stress. Most transmission electron microscopes (TEMs) need the samples to be studied within a vacuum, but a new version called an environmental TEM (E-TEM) allowed the team to study the metal with the coating in the natural environment. E-TEM was used to study a specific type of failure: stress corrosion cracking.

When exposed to a superheated steam environment inside a reactor vessel, the metal will corrode very quickly. Cracks still form in the metal with a protective layer, exposing the metal to corrosive oxygen. This inspired the team to create their new protective material.

"Traditionally, people think that the metal oxide would be brittle and subject to cracking," Yang said. “No one had demonstrated otherwise because it is so difficult to observe the material's behavior under realistic conditions. But no one had ever observed how it deforms at room temperature.”

That is where the E-TEM became a main player in the research.

Using the E-TEM allowed the material to be observed at almost an atomic resolution for the first time ever. The new approach showed that an incredibly thin aluminum oxide layer is almost as deformable as a thin layer of aluminum metal. When aluminum oxide is applied to the surface of aluminum, the flow of the material covers the aluminum in a protective layer.

Inside the E-TEM, the team found that aluminum with the oxide coating can be stretched more than double the length without cracks.

“The oxide forms a very uniform conformal layer that protects the surface, with no grain boundaries or cracks," even under the strain of that stretching,” Yang said.

It has always been thought that metal oxide can never be pliable, but the researchers have proved this wrong.

A paper on the new protective metal was published in Nano Letters.

By posting a comment you confirm that you have read and accept our Posting Rules and Terms of Use.
PROTECTIVE COATING
#1

can you please send me the paper?

also is this already available for comercial it?