New Discovery for the Development of a Rechargeable Magnesium-metal Battery 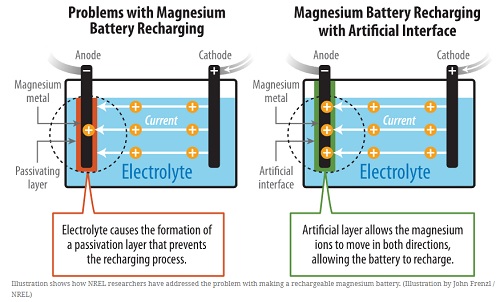 Researchers have found a way to create stable magnesium-metal batteries. Source: NRELScientists have been searching for an alternative to the ubiquitous lithium-ion batteries for years in order to find a battery that will last longer, have high energy output and be stable and safe.

In regard to this, scientists at the U.S. Department of Energy’s National Renewable Energy Laboratory (NREL) have discovered a new approach for the development of a rechargeable non-aqueous magnesium-metal battery.

The NREL method enabled the reversible chemistry of magnesium metal in a noncorrosive carbonate-based electrolyte and tested the concept in a prototype cell. Scientists believe this battery could have the potential for a high energy density, greater stability and a lower cost than lithium-ion batteries.

Magnesium (Mg) batteries contain almost twice as much energy per volume as lithium-ion batteries. However, the problem is the chemical reactions of the conventional carbonate electrolyte created a barrier on the surface of magnesium that prevented the battery from recharging. While the magnesium ions could flow in a reverse direction through a corrosive liquid electrolyte, it bared the possibility of a successful high-voltage magnesium battery.

Researchers developed an artificial solid-electrolyte interphase from polyacrylonitrile and magnesium-ion salt that protected the surface of the magnesium anode improving performance.

The team then developed prototype cells to prove if the protected anode enabled reversible Mg chemistry in carbonate electrolyte. It not only protected it but also delivered more energy than a prototype without the protection and continued to do so during repeated cycles. The researchers then demonstrated the rechargeability of the magnesium-metal battery, providing a new way to address the anode/electrolyte incompatibility and the limitations on ions leaving the cathode.

Magnesium has potential advantages over lithium-ion battery technology including: magnesium releases two electrons to lithium’s one, giving it the potential to deliver nearly twice as much energy as lithium; and magnesium-metal batteries do not experience the growth of dendrites, which are crystals that can cause short circuits and overheating, making them safer than lithium-ion batteries.

The full research can be found in the journal Nature Chemistry.

By posting a comment you confirm that you have read and accept our Posting Rules and Terms of Use.
Advertisement
RELATED ARTICLES
Mg2018 Begins Next Week
Nanowires May Boost Fire-Resistant Capabilities of Lithium-ion Batteries
Solid state battery stability improves with 'battery butter'
Sandwich battery offers powerful treat for EVs
Oak Ridge licenses tech to take the cobalt out of Li-ion batteries
Advertisement