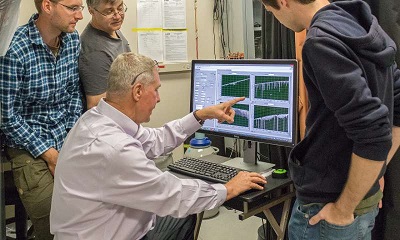 The mid-infrared laser technique can detect any chemical present even at concentrations as low as one part per billion. Source: University of Central Florida/ Karen NorumThe dangers of chemical weapons have made headlines recently, pointing to the need for early warning and detection techniques. A new laser technique engineered at the University of Central Florida could be deployed for this protective purpose, as it can detect even trace amounts of toxic agents in the air.

The platform for mid-infrared, dual-comb, Fourier-transform spectroscopy provides fast -- 7 ms for a single interferogram -- moving-parts-free, simultaneous acquisition of 350,000 spectral data points. The technique is sensitive enough to determine if there is a molecule of any chemical present even at concentrations as low as one part per billion.

The researchers say this approach could advance non-invasive technology such as sensors designed to detect airborne agents encountered in a biological or chemical attack at home or on the battlefield, or evidence of life by space missions to other planets or asteroids.

Efforts are now devoted to broadening the range of laser frequencies, reducing costs and developing mobile applications of the technology.