Power Demand Fell in 2017, Hitting Both Coal and Natural Gas

Lower electricity demand in 2017 led to a 1.5 percent drop in total U.S. electricity generation. Natural gas and coal generation fell by 7.7 percent and 2.5 percent from 2016, respectively, as generation from several renewable fuels, particularly hydro, wind and solar, increased from 2016 levels. 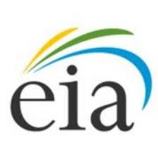 The declines marked the first year since 2008 that both natural gas- and coal-fired electricity generation fell in the same year, EIA says. 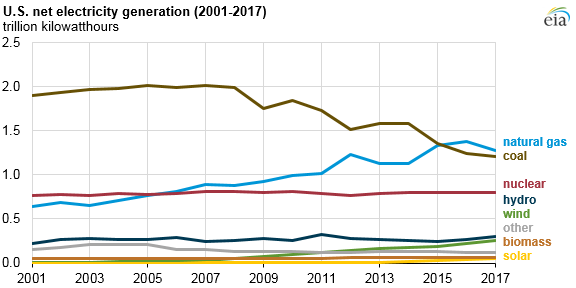 Credit: EIACoal-fired generation accounted for more than half of the electric capacity retired in 2017, with 6.3 gigawatts (GW) of the 11.2 GW total. For the first year in at least a decade, no new coal-fired generators were added.

Credit: EIAElectricity from renewable sources, especially wind and solar, rose in 2017. Wind made up 6.3 percent of total net generation. Utility-scale solar made up 1.3 percent, representing record shares for both sources.

In part as a result of record precipitation in California, hydroelectricity increased in 2017, accounting for 7.5 percent of total net generation. EIA expects hydro to continue to exceed wind in 2018, but wind is projected to become the predominant renewable electricity generation source in 2019.

By posting a comment you confirm that you have read and accept our Posting Rules and Terms of Use.
Advertisement
RELATED ARTICLES
The Shift Away from Coal in One Picture
Efficiencies Improve for Natural Gas Power Plants, EIA Says
South Opts for Natural Gas as Coal Declines
Fossil Fuel Use for Power Fell in 2017, EIA Says
Blame Economics, Not Regulations, for Coal's Decline, Study Says
Advertisement