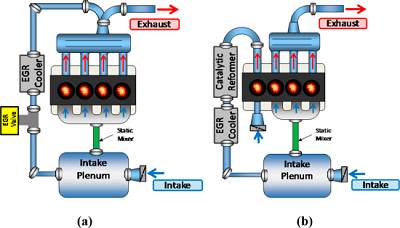 Schematic of the engine and test cell configuration for (a) the conventional EGR configuration and (b) the catalytic exhaust gas recirculation (EGR)–loop reforming strategy. Source: Chang, et al.reforming combined with higher EGR operation, resulting in a decrease of more than 8 percent in fuel consumption, compared to baseline operation.

The technology also decreases the propensity of knocking for a given fuel, which can be used as the basis for additional increases in efficiency through more advanced combustion phasing or higher compression ratio. EGR also reduces nitrogen oxides emissions over a broad range of speed and load conditions.

However, the amount of EGR dilution that can be used is limited due to cycle-to-cycle combustion instability, thereby limiting its potential efficiency benefits.

Undeveloped benefits of the technology include:

No attempt was made to optimize the fuel injection timing or targeting, or more broadly, optimize the overall catalyst fueling strategy.

The research is published in ACS Energy & Fuels.