The Making of a Dental Implant 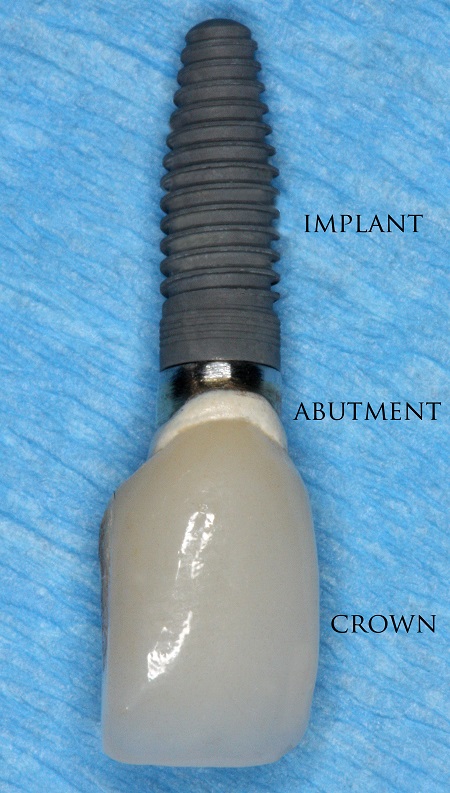 Source: Coronation Dental Specialty Group/CC BY-SA 3.0, via Wikimedia Commons.One of the many innovations that play a key role in the practice of modern dentistry is the dental implant – a surgical component that supports a prosthesis such as a crown, bridge or denture, or acts as an anchor for orthodontics.

The success of implants relies on a process known as osseointegration, in which a connection is made between living bone – in this case, the skull or jawbone -- and the surface of an artificial implant. Implant fixtures are put in place first, before the addition of a prosthesis, in order to facilitate the osseointegration process.

Not surprisingly, the material used to create the fixture is crucial to that process. Typically, this is titanium. Thanks to its strength, light weight, high corrosion-resistance and biocompatibility, titanium has emerged as a medical “metal of choice.” Its non-ferromagnetic property also makes it possible for patients with implants to be safely examined with an MRI.

Medical-grade titanium is often an alloy made with aluminum and vanadium, such as Grade 5 or Ti 6-4 (six percent aluminum, four percent vanadium). Grade 5 offers significantly greater strength than commercially-pure titanium, while also being heat treatable -- it is sometimes referred to as the “workhorse alloy” of the titanium industry.

The process of making an implant involves feeding a long titanium rod through a machine for cutting, threading and shaping it -- hundreds of implants can be made from a single rod. A variety of treatments may then be applied to the surface of the implants to increase the chance of successful osseointegration -- a number of studies have shown that rough, porous surfaces tend to work better than smooth. Treatments may include acid-etching, anodization, various types of coatings and sand or grit-blasting. This video, from Canadian television series How It’s Made, illustrates a typical manufacturing procedure for titanium implants.

Titanium implants can be made as a two-piece system: a root component is placed at the level of underlying bone, and an abutment component that protrudes from the gums is attached to hold the prosthesis. The two-piece approach increases placement flexibility, and also allows for the option of both permanent fixtures and removable ones, such as dentures.

Metal hypersensitivity is an issue for some individuals, which blood tests can reveal prior to implant placement. One newly-emerged alternative to titanium is zirconia, a hard ceramic with a superior aesthetic quality. FDA-approved zirconia implants tend to be one-piece, however, which limits placement control and necessitates a permanent attachment. Zirconia also has a lower elasticity, which increases the chance of micro-fracturing.

There is also an alloy called Roxolid which was designed by dental implant market leader Straumann. It could be considered to be the best of both worlds, as it is composed of 85 percent titanium and 15 percent zirconium. According to Straumann, the material allows for reduced invasiveness while also offering flexibility, thanks to the availability of smaller implants.

Recent developments in the additive manufacturing world have begun to point toward the production of dental implants via 3D printing. A recent three year follow-up clinical study published in the International Journal of Dentistry showed promising results, while also highlighting the need for further study. The technology would enable porous surfaces to be built layer-by-layer, eliminating the need for post-production surface treatment. It would also offer a high degree of customization to each individual patient. The integration of 3D printing into modern dentistry is already significant, companies such as EnvisionTec offer machines that can print dental appliances, crowns and bridges, denture frameworks and more.

By posting a comment you confirm that you have read and accept our Posting Rules and Terms of Use.
Advertisement
RELATED ARTICLES
Promising Future for New, Implantable Titanium Alloys
When Job is Done, Orthopedic Implant is Absorbed by the Body
Sugary coating may improve implants in osteoporotic environments
Dog Gets New 3D-printed Skull
Biomedical implant elasticity, durability to benefit from new alloy
Advertisement