A multifunctional metal–organic framework (MOF) materials platform developed at U.S. Sandia National Laboratories is expected to find application in bioimaging and treating cancer. MOFs have already found use in capturing radioactive gases from spent nuclear fuel, cleaning contaminated water and storing hydrogen gas safely. This research marks the first time the intrinsic luminescence of these materials for long-term bioimaging has been reported.

The new MOF nanoparticles glow red or near infrared for at least two days in cells. Near infrared light is useful 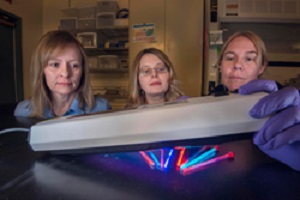 Lauren Rohwer, Dorina Sava Gallis and Kim Butler (left to right) examine tubes of glowing MOF nanoparticles that they designed, synthesized and tested. Source: Randy Montoyafor medical imaging because it can penetrate tissue and bone without damage and generates clear images. Available dyes or nanoparticles that glow in the near infrared don’t last for very long or only glow weakly, making brighter, more stable materials invaluable.

The particles are composed of lanthanides, including europium, which fluoresces red, and neodymium and ytterbium that fluoresce in the near infrared. Having multiple metals makes them more stable in water, and the researchers gave the particles complex shapes with large pores that can potentially carry drugs to allow both imaging and treatment.

The researchers assembled a family of similar MOFs with a range of emission colors from red to near infrared allowing researchers to “tune” the MOF color depending on what it might be needed for. Even at high doses used during cytotoxicity tests, the nanoparticles were similar to or less toxic than other particles being studied for bioimaging. Live-cell imaging using a customized hyperspectral confocal fluorescence microscope showed the MOF particles can work for long-term bioimaging studies in mammalian cells but might need to be further optimized, perhaps by modifying the surface of the particles.