A coalition in Sweden looks to break ground on a pilot project aiming to produce steel without the use of fossil fuels. The HYBRIT project replaces coking coal, which is traditionally needed to make ore-based steel, with hydrogen. 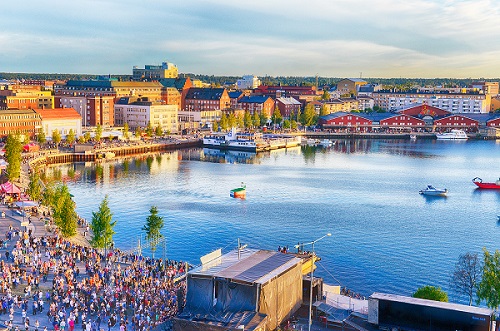 Luleå, the site of HYBRIT's proposed pilot plant. Source: Andreas Harnemo / CC BY-SA 3.0HYBRIT is a joint venture between SSAB, the largest Nordic steel producer; LKAB, Europe’s premier iron ore producer; and Vattenfall, a large electric utility. The group conducted a pre-feasibility study from 2016-2017 and hopes to spend this spring planning and designing a pilot plant. HYBRIT plans to break ground this summer, with the pilot phase extending at least through 2024. Overall, the group hopes to achieve competitive fossil-free steel production around 2035.

The pilot plant will be located in Luleå, a major steel-producing center in northern Sweden. Development will also occur in the Norbotten ore fields 250 km (155 miles) northwest of Luleå.

According to HYBRIT’s website, the group estimates that fossil-fuel-free steel production would be 20 to 30 percent more expensive than conventional methods, given the current prices of electricity, coal and carbon dioxide emissions. The estimated cost of planning and designing the new plant is 20 million Swedish kronor, half of which will be financed by the Swedish Energy Agency. The other half will be provided by SSAB, LKAB and Vattenfall.

The steel industry is a major contributor to CO2 emissions. According to a 2013 MIT press release, producing a ton of steel also produces two tons of carbon dioxide emissions. HYBRIT’s proposed plant would have virtually no carbon footprint, saving tons of emissions per year. HYBRIT looks to begin converting existing blast furnaces in Sweden and Finland as early as 2025, with a goal of being totally fossil-fuel-free by 2045.

By posting a comment you confirm that you have read and accept our Posting Rules and Terms of Use.
Advertisement
RELATED ARTICLES
First fossil fuel-free steel delivered to Volvo Group
Sweden to host world’s largest ‘green steel’ hydrogen plant
DOE will fund these projects to improve coal-fired power plants
Ironmaking 101 – From Ore to Iron with Smelting and Direct Iron Reduction
Technology and Processes Behind Steel Production
Advertisement