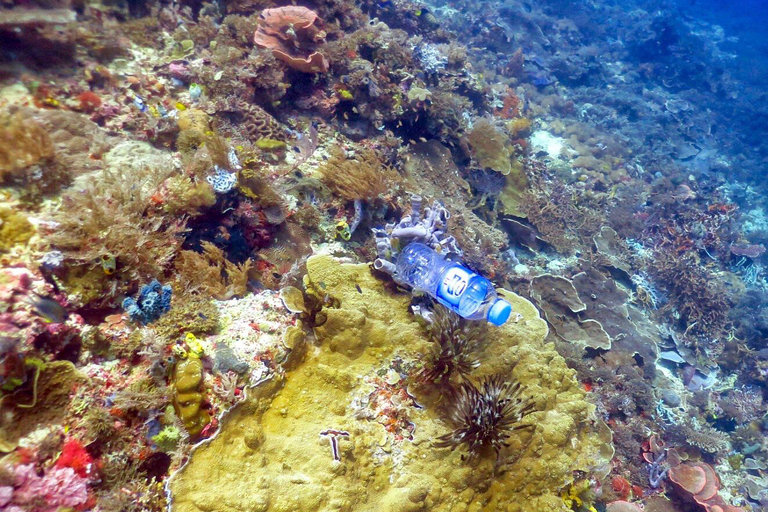 Source: Dr. Kathryn Berry It’s no secret that discarded plastic products like water bottles and grocery bags are polluting our oceans. However, scientists are just now discovering the impact that plastic waste is having on the world’s coral reefs.

Detailing their findings in the journal Science, researchers have determined that billions of pieces of plastic are threatening the health of once-vital corals in the Asia-Pacific region, which consequently, threatens both ecosystems and economic growth in that region.

“We would come across a baby’s diaper or a Q-tip, bottle, plastic bag, or broken fishing line,” said study co-author Joleah Lamb, a marine disease ecologist and post-doctoral research associate at Cornell University. “These plastics are affecting these really structurally complex corals. What are the implications? There are some diseases that jump out at us.”

The team of researchers looked at over 150 coral reefs between 2011 and 2014 and found that plastic littered a third of the surfaces they examined.

Estimating that 11.1 billion plastic pieces pollute coral reefs in that region, researchers found that the Australian corals contained the least amount of plastic waste while Indonesian corals contained the most. Based on the amount of plastic that is dumped into the ocean each year, researches expect the number of plastic pieces currently polluting the reefs to climb to 15.7 billion items by 2025.

In locations where plastic contamination was found, the research team determined that the corals were sick 89 percent of the time — a twenty-fold increase in illnesses such as black band disease, skeletal eroding band disease and white syndromes, all of which kill the polyps responsible for creating the hard skeletons that make up the coral reefs.

Lamb suspects that the cause is a straightforward one: “It could be that plastics are shading the corals, corals are stressed and there is this low oxygen, low-light habitat that these bacteria really love,” she said.

Yet, regardless of the cause, one thing is certain, according to researchers: 275 million people rely on the coral in that region for tourism income, food, coastal protection and a number of other benefits.

But, according to Lamb, there is some good news amid the bleak findings.

"Corals are extremely resilient,” said Lamb. “They are fighters. If you went and took all the plastic off, they would have a fighting chance. Even if they do die, that’s still a substrate for a baby coral to land on. That could proliferate for a whole new colony.”

By posting a comment you confirm that you have read and accept our Posting Rules and Terms of Use.
Advertisement
RELATED ARTICLES
Palau Will Ban Certain Suncreens to Protect Its Coral Reefs
3D-printed terracotta tiles could save coral reefs
Protecting Coral Reefs with Floating Film
Oxybenzone Damages Reefs
Watch how offshore wind farms can shelter coral reefs
Advertisement