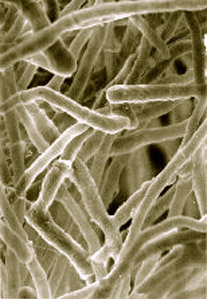 The fungi trichoderma reesei could heal cracks in concrete.

Congrui Jin, assistant professor of mechanical engineering at Binghamton University has researched concrete and found that the problem stems from the smallest cracks.

"Without proper treatment, cracks tend to progress further and eventually require costly repair," said Jin. "If micro-cracks expand and reach the steel reinforcement, not only the concrete will be attacked, but also the reinforcement will be corroded, as it is exposed to water, oxygen, possibly CO2 and chlorides, leading to structural failure."

Cracks in infrastructure can cause major and sometimes unseen problems for infrastructure. Take the case of nuclear power plants for example. Nuclear power plants may use concrete for radiation shielding. Remaking a structure would replace the aging concrete, but it would only be a short-term fix until more cracks spring up in the future. Jin wanted to see if there was a way to fix these concrete issues permanently.

"This idea was originally inspired by the miraculous ability of the human body to heal itself of cuts, bruises and broken bones," said Jin. "For the damaged skins and tissues, the host will take in nutrients that can produce new substitutes to heal the damaged parts."

"The fungal spores, together with nutrients, will be placed into the concrete matrix during the mixing process. When cracking occurs, water and oxygen will find their way in. With enough water and oxygen, the dormant fungal spores will germinate, grow and precipitate calcium carbonate to heal the cracks," explained Jin. "When the cracks are completely filled and ultimately no more water or oxygen can enter inside, the fungi will again form spores. As the environmental conditions become favorable in later stages, the spores could be wakened again."

The research is still in the early stages. The biggest issue the research is currently facing is the survivability of the fungus within harsh environment concrete. Jin is hopeful that with further adjustments T. reesei will be able to fill the cracks.

"There are still significant challenges to bring an efficient self-healing product to the concrete market. In my opinion, further investigation in alternative microorganisms such as fungi and yeasts for the application of self-healing concrete becomes of great potential importance," said Jin.

The paper on this research is published in Construction and Building Materials.

By posting a comment you confirm that you have read and accept our Posting Rules and Terms of Use.
Re: Watch: Self-Healing Fungus Could Fix America’s Crumbling Infrastructure
#1

This sounds like a swell idea. How it makes it in real life is yet to be determined. I would like to try a tube of the repair stuff on my driveway. A few years ago I poured a concrete slab in my backyard. A corner broke off when I removed the forms (too soon?). I glued it back with epoxy, and now the site of the repair is not visible at all. The cement was still "green" at the time, so that probably helped it work.