Robotic Weeders: Coming to a Farm Near You? 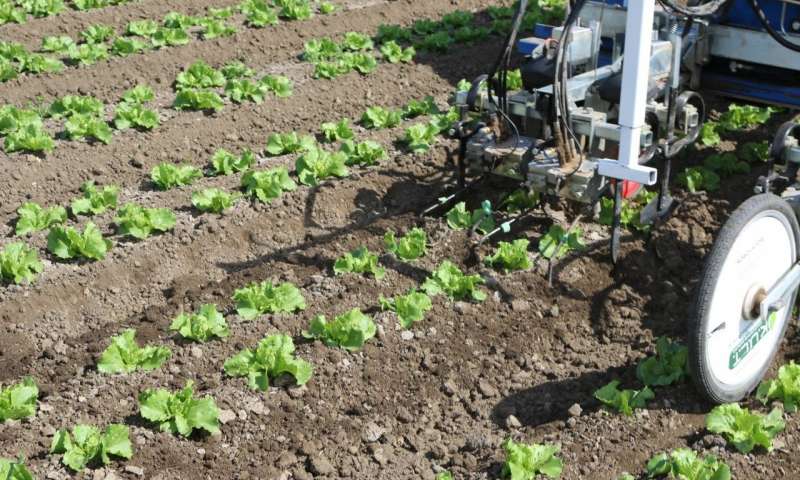 This robotic weeder is operating in a field near Santa Maria, CA in June 2015. The field is full of a specialty crop. Source: Steven FennimoreAs organic farming using fewer pesticides increases in popularity and the cost of hand weeding skyrockets, experts believe that robotic weeders will become more and more of a presence on farms.

Robotic weeders have already gained notice mostly for two specific purposes -- firstly in response to the lack of available herbicides used for specialty crops like lettuce, broccoli, tomatoes and onions, which are not mass-produced like wheat, corn and soybeans. The second purpose is a consequence of the first, in that without pesticides, growers are forced to hire people to hand weed sometimes enormous fields.

Hand weeding is both slow and expensive, costing anywhere from $150 to $300 per acre — a major factor motivating growers to consider robotic weeders.

“I've been working with robotic weeders for about 10 years now, and the technology is really just starting to come into commercial use," said Steven Fennimore, an extension specialist at the University of California, Davis. "It's really an economic incentive to consider them."

Fennimore, who helps university students and companies test the robotic weeders, insists that the technology is just getting better and better.

Capable of recognizing patterns and telling the difference between plants and soil, the weeders are, according to Fennimore, having a little trouble distinguishing between a weed and a crop — an issue that companies are attempting to remedy through training. Likewise, Fennimore is working on a tagging system that will help the machines avoid crops entirely.

"The problem with the machines right now is that they are version 1.0, and there's tremendous room for improvement," he said. "The inability to be able to tell the difference between a weed and a crop requires the grower to be very exact when using them. The rows have to be a little straighter, cleaner, and more consistent because the machines aren't that sophisticated yet. The robots don't like surprises."

With current robotic weeders on the market costing between $120,000 and $175,000, many growers are waiting for the technology to improve and to also become cheaper. However, for some growers, the machines may prove a better solution long term when compared to the cost of expensive hand weeding.

"I believe what makes the robotic weeders better than herbicides is that this electronic-based technology is very flexible and can be updated easily," Fennimore said. "We all update our phones and computers constantly, which is a sign of a robust and flexible technology."

By posting a comment you confirm that you have read and accept our Posting Rules and Terms of Use.
Advertisement
RELATED ARTICLES
Robotic duck assists with rice farming
Video: Autonomous weeding robot improves crop yield, costs
Raspberry-picking robot can pick 25,000 raspberries a day
IoT Down on the Farm
Are Artificial Christmas Trees Better for the Environment Than Real Christmas Trees?
Advertisement