Figure 1 - Magnesium parts in U.S. Vehicles Source: USAMPMagnesium parts have been used almost everywhere in a vehicle, including the powertrain, body and closures, suspension and chassis, and interior. Many interior components such as steering wheel armatures and steering column brackets are made from magnesium where corrosion is not an issue. Some of the most common magnesium applications include engine blocks, gearboxes and clutch housings, oil pans, wheels and engine cradles, where stress can be distributed and high loads avoided. In these applications, magnesium provides weight reductions of 40–50 percent and 15–33 percent, compared to steel and aluminum, respectively. 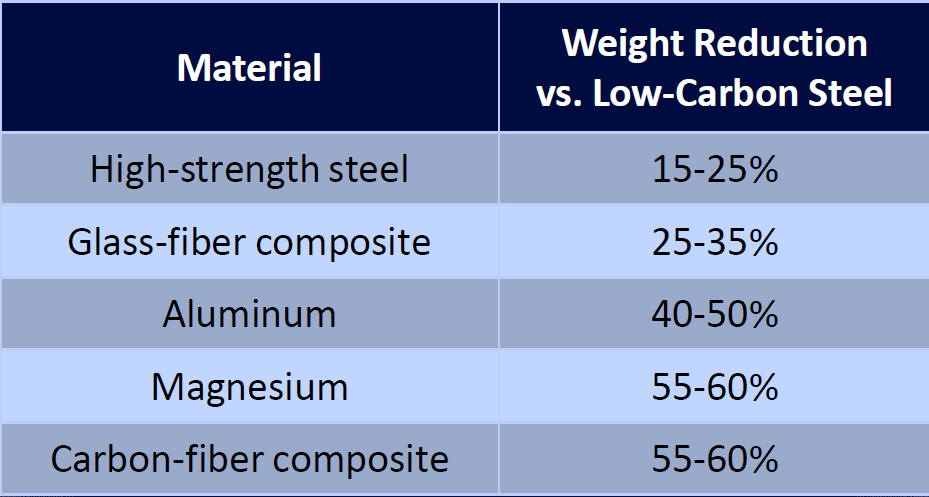 Volkswagen used magnesium engine blocks and crankcases in their vehicles for many years. From 1951 to 1981, Volkswagen purchased 60 percent of Norsk Hydro’s total magnesium production, which eventually grew to 50,000 metric tons per year. Magnesium alloys work well in engine block applications because a certain volume of material is required to accommodate coolant and oil lubrication passages and the block is not highly loaded. BMW produced the first water-cooled engine, the BMW N52, to use a magnesium engine block. The BMW engine had aluminum alloy inner block cylinder liners, which compensated for magnesium’s shortfalls. The aluminum liners provided corrosion resistance and stability under higher mechanical strains and extreme temperatures, while the water coolant only circulated through the aluminum. 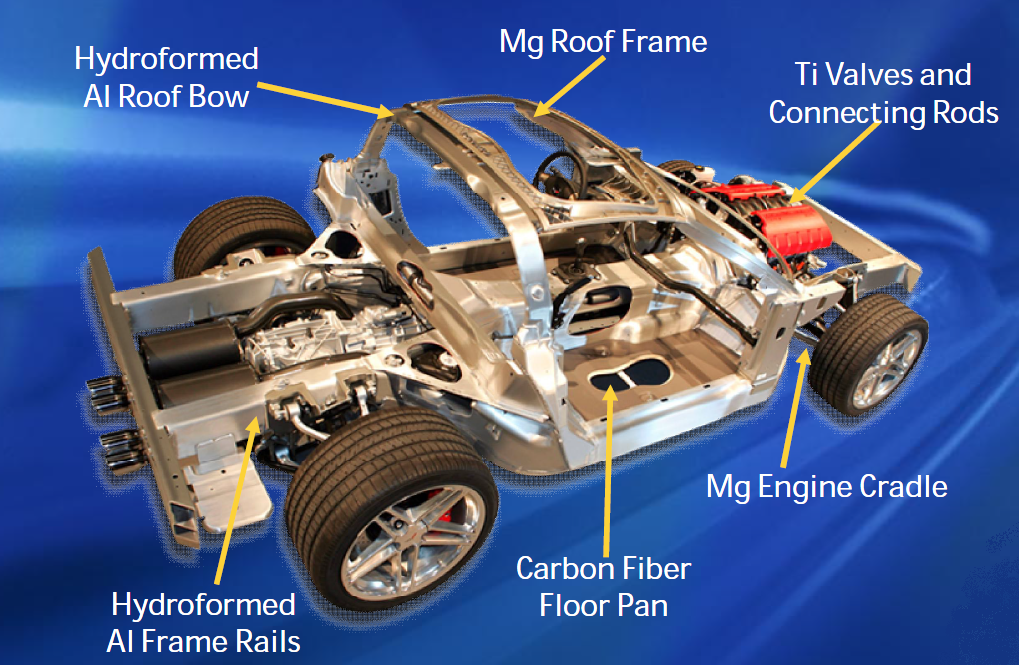 Magnesium is a viable alternative to steel, aluminum and other structural materials, and it has the potential to provide a significant weight saving in future vehicles. However, magnesium has certain limitations compared to more widely used automotive materials, which has restricted expanded utilization. 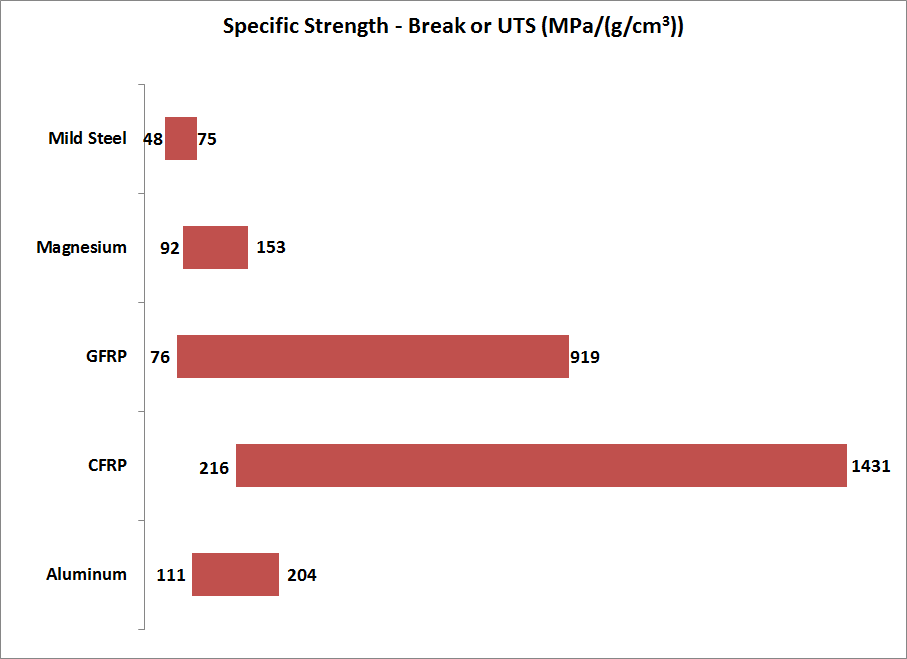 Figure 4 - Specific strength calculated from UTS or break strength and density. Source: VariousThe density of magnesium is about two-thirds the density of aluminum (1.8 g/cm3 for magnesium vs. 2.7 g/cm3) and close to the density of carbon fiber composites (1.6 g/cm3). Magnesium alloys are lighter than aluminum alloys but similar in strength depending on the alloys compared. Magnesium has limitations in handling high loads and finished components have lower ductility levels compared to aluminum or mild steel. While some magnesium alloy can have specific higher specific strength or strength-to-weight ratios compared to the mild or low carbon steels and aluminum, advanced high strength steels (AHSS) and aerospace aluminum alloys would have higher specific strengths.

Substitution of magnesium or other lightweight materials in place of steel and aluminum requires not only sufficient specific strength but also adequate rigidity or specific elastic modulus. Magnesium has a lower modulus than steel or aluminum, so additional section thickness is required to provide equivalent stiffness. However, the specific modulus of magnesium is only slightly lower than specific moduli of aluminum and steel alloys. Magnesium’s high damping capacity can be an advantage in reducing noise, vibration and harshness (NVH) during the vehicle design. The dampening capacity of diecast AZ91 is 30 times higher than diecast Al380 aluminum according to Materials Properties of Magnesium data from The Minerals, Metals & Materials Society (TMS).

Magnesium research and development efforts have not been as extensive as aluminum and steel alloy R&D, so magnesium has a limited alloy set compared to aluminum and steel. Magnesium alloys do not have the creep resistance of steel, which limits their use in higher temperature engine part applications. Magnesium alloys with improved creep resistance in the 150 to 200 degrees C range have been developed to operate at elevated temperatures experienced in automotive drivetrain applications. The creep resistance of magnesium alloys is enhanced with additions of silicon, calcium, strontium and rare earth elements. Metallurgists continue to research and develop new alloys to improve the materials properties and potential applications. 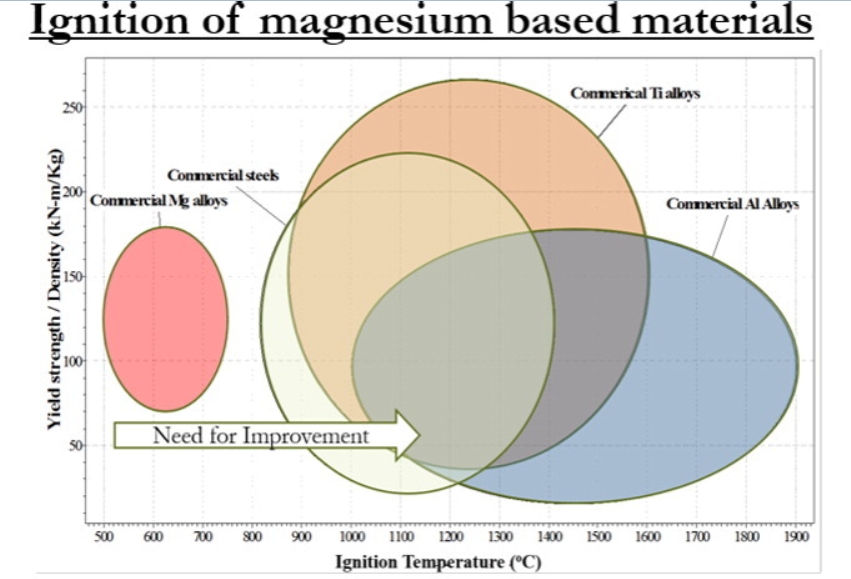 Figure 5 - Ignition temperatures of magnesium and other metals. Source: Elsevier Materials Design JournalMagnesium is perceived to be flammable or pyrophoric in nature, and this might be impeding greater use of magnesium. While magnesium has a lower self-ignition temperature compared to aluminum and steel, powdered aluminum and iron can ignite or burn too. In many automotive applications (body, chassis, interior and powertrain parts), the possibility of igniting a magnesium part is not a concern. Obviously, magnesium should not be used on components exposed to hot gases or combustion temperatures. A 2 percent calcium alloying addition results in a non-combustible wrought magnesium alloy, AMCa602. The more reactive calcium addition forms an oxide layer on the alloy’s surface, which inhibits ignition. 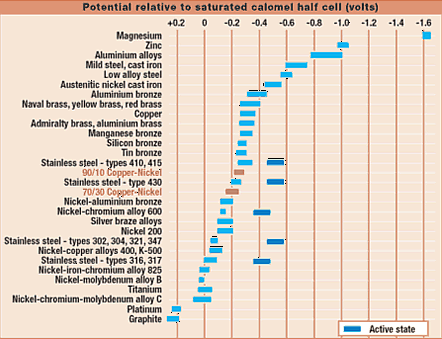 Figure 6 - Galvanic corrosion potential of various metals. Source: Copper Development AssociationMagnesium is not as corrosion-resistant as aluminum, so protective coatings are required if the component will be in a wet, corrosive environment. Assembly and joining of magnesium to other materials is another issue, which can exacerbate corrosion because all structural metals are cathodic to or nobler than magnesium. Magnesium has a lower anodic index or greater electronegative potential compared to any other common engineering. In wet, salty conditions, galvanic corrosion will occur when magnesium is in contact with any other metals. The magnesium part will act as a sacrificial anode. Corrosion issues in multi-material systems cause difficulties in joining, repairing and recycling parts. 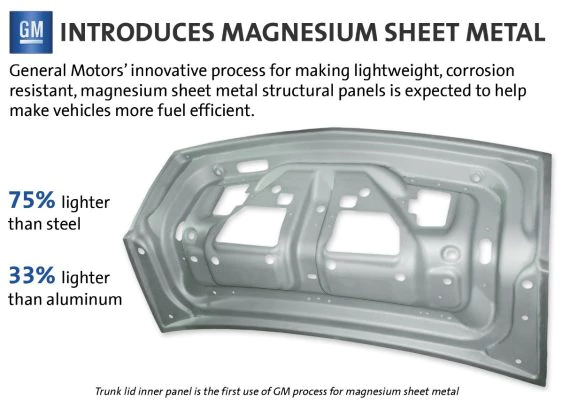 Figure 8 - In 2013, General Motors tested an industry-first thermal-forming process and proprietary corrosion resistance treatment for lightweight magnesium sheet metal. Source: General MotorsHowever, inconsistent properties have occurred with some high-pressure die cast (HPDC) parts. Castings can have defects such as internal porosity from solidification shrinkage, inclusions and segregation. Wrought alloys undergo thermomechanical processing such as rolling, extrusion or forging, which breaks up inclusions, increases homogeneity, and closes up porosity. Unfortunately, magnesium sheet is difficult to form at ambient temperatures, so body panel applications might be limited. Newer "warm" magnesium sheet forming techniques are being developed, which utilize heat to increase the formability of magnesium during stamping. In 2012, General Motors announced the development of a thermal-forming process and a proprietary corrosion resistance treatment for magnesium sheet metal that will allow increased use of magnesium in vehicles as a high-strength alternative to steel and aluminum (GM Pioneers Use of Lightweight Magnesium Sheet Metal). Improved wrought magnesium alloys are under development as well.

Replacing steel or aluminum parts with magnesium parts requires more effort than just selecting an alternative material, which results in additional engineering costs and possibly longer design times. A change in materials often impacts other aspects of automobile design and manufacturing. Design engineers will have to understand and adjust part geometry to account for the property limitations of magnesium.

Using a new material always carries new risks related to crashworthiness, corrosion and structural integrity. Additional analysis and testing will likely be required to overcome risk aversion of using an alternative material. Automotive parts are often shared across multiple car platforms, which can constrain flexibility in re-designs, including powertrain components and body and chassis parts. Sufficient resources need to be applied to create a “design for magnesium” approach early in the new vehicle development process in order to design magnesium components sharable across several vehicle platforms.

Many automotive manufacturers have selected magnesium for specific parts in a new vehicle design, but the magnesium parts are often replaced in later model years with a redesigned part using a lower cost or better performing material. In some cases, the use of magnesium parts may have been discontinued due to corrosion, creep or other limitations of the magnesium alloy selected. Production engineers are typically tasked with reducing manufacturing costs in order to improve profitability, so parts made of a higher cost material like magnesium can present a cost reduction opportunity to an engineer. An inexpensive magnesium supply and improved magnesium alloys could lead to the long-term use of many more magnesium automotive parts. Until that happens, magnesium cost factors need to be considered in addition to property limitations and manufacturing constraints.