Not all vehicle emissions come out of the tailpipe. Brakes and tires account for 32 percent of driving-related particulate emissions, half of which is brake dust, according to German environmental officials. Now, Buderus Guss, a subsidiary of automotive supplier Bosch, has devised a cleaner disc brake.

The iDisc generates up to 90 percent less brake dust than a conventional brake disc. The technology is based on a conventional cast-iron brake disc but also has a tungsten-carbide coating made exclusively by the company. To transform a conventional disc into an iDisc, the friction rings are mechanically, thermally and galvanically treated before being coated

In addition to a substantial reduction in brake dust, the carbide coating also provides greater operating safety. The braking performance is like that of a ceramic brake, especially in terms of fading – the reduction in stopping power following repeated braking maneuvers. Similar to a ceramic brake disc, the iDisc is highly stable in this respect and loses little deceleration performance.

Wear is also significantly reduced. Depending on the strength of the carbide coating, the iDisc’s service life is twice that of a normal brake disc.

The iDisc also eliminates gouging marks on the friction ring, as well as corrosion—a major advantage, especially in electric cars. Because they recover braking energy via recuperation, electric cars put less strain on the brakes and have to contend with rust formation on friction rings. The temporary slight decline in responsiveness during braking associated with this does not occur with the iDisc. 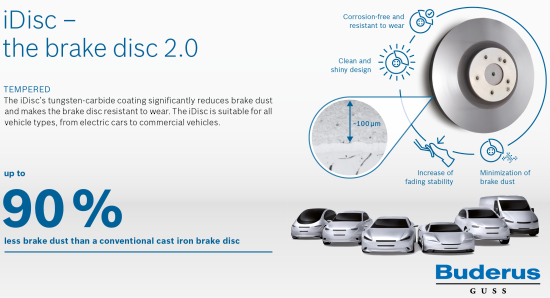 sue has pointed yet another milestone advance. I should have thought of this, doggone it!!! Somebody is gonna get rich, ri-ich, ri-ii-ii-ich.

This may show up on some high end/performance cars as an OEM option.

As a replacement for conventional discs, it's a non-starter, unless the cost is only a few dollars more.

Ceramic pads have come a ling way in reducing excess dust problems, but they are relatively much more expensive themselves.

I guess that with iDisc and ceramic pads we could be looking at "lifetime" brakes.

I'd like to introduce myself to you, my name is Joe Gelb with Brake Pad Waste Collection Systems.

I would like to make available information regarding disc and or drum brake debris collection Systems with you. I can offer many different configurations for most any application. By combining both Technologies, I feel we can get closer to 100% of collection of debris on vehicles, trucks, and rail. Dynamometer testing show 92%+ collection of debris collected with less wear on inner and outer pad including the rotor. Basically any system utilizing a drum or disc brake solid or vented rotor configuration can be adapted. No interference with existing brake assembly nothing touching the brake except moving air which can aid in cooling of the components.

OK, thanks for the information.