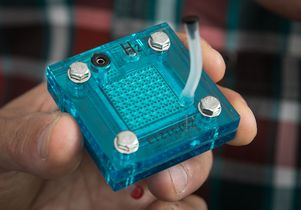 A replica of the device. Source: Reed Hutchinson/UCLAthe University of California, Los Angeles could be used to power electronics or produce fuel for hydrogen cars.

While hydrogen fuel cells and supercapacitors typically use two electrodes, the new system features a third electrode functioning as both energy-storing supercapacitor and as a water electrolysis device. The electrodes are coupled to a solar cell as the device's power source, and the electrical energy harvested by the solar cell can be stored electrochemically in the supercapacitor or chemically as hydrogen.

The researchers observe that the use of solar cells and abundant, inexpensive elements such as nickel, cobalt and iron for electrolysis offers scope to reduce hydrogen production costs in a process that could eventually replace fossil fuel-based methods.

The electrodes were designed at the nanoscale to ensure the greatest surface area would be exposed to water, which increases the amount of hydrogen the device can produce and also stores more charge in the supercapacitor. The palm-sized prototype is easily scaled up due to the low costs of components.