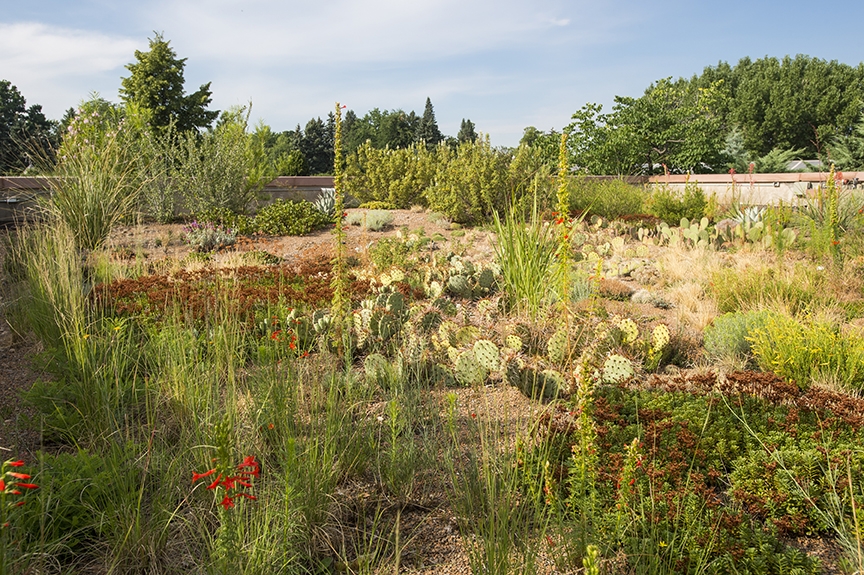 This living roof is a testing ground for growing plants atop buildings in a semi-arid environment, and includes more than 100 species of native, drought-tolerant plants. Souce: Denver Botanic GardensOn Tuesday, voters in Denver approved an ordinance requiring that any building greater than 25,000 square feet have a percentage of its roof covered with green, vegetative space or solar. The percentages are based on the size of the building. This will now be a requirement for new construction and existing buildings will have to comply at the time of normal roof replacement. The ordinance applies to all commercial or public buildings, but only to residential buildings that are over four stories high and more than 25,000 square feet.

The grass roots initiative came about as a way to address a number of environmental issues impacting the city, including urban heat island effect and air quality. According to data from 2013-2014 measuring the average temperature difference between the city and surrounding rural areas over an entire summer, Denver ranked third in the country as an urban heat island with a nearly five-degree temperature difference. The American Lung Association's State of the Air report also ranks Denver eleventh for worst air quality.

Advocates of green roofs cite a number of other benefits to planting vegetation on the roofs of the city's largest buildings as well. Green roofs improve insulation and lower energy costs for heating and cooling and improve stormwater drainage by slowing the flow of runoff.

Roof-top green spaces provide relaxing outdoor lunch or activity venues for building tenants and employees. They even become visual oases for those in surrounding buildings who see gardens or park-like settings rather than plain, industrial roofs. Green roofs may also be used for urban agriculture and rented out to urban farmers for that purpose.

Opponents of the initiative objected to the mandate due to concerns that green roofs are costly and would ultimately hurt nonprofits and affordable housing programs. Proponents point out that exemptions are available on a case-by-case basis, and that the additional costs of a green roof are recouped in about six years through lower utility bills and longer life than a typical roof.

In Denver, as well as around the country, green roofs are also used to study, for example, plant growth and weather patterns. Green roofs promote biodiversity for insects (especially pollinators) and birds.

The Denver area has a number of existing green roofs, including those at the Community College of Denver, Metro State University, EPA Region 8, Denver Botanic Gardens, River North Art District, REIs flagship store and the Anschutz Medical Campus in Aurora.

Watch a video featuring the Community College of Denver's green roof and learn more about the benefits here.